The rap formation Pretty Boy Gangsters are almost completely unknown to the public today, but their cassette release of the album “Rollin Like a Star” is a classic in certain circles. In the early 90s and beyond the track “K The Buster” appeared on several compilation albums next to titles from NWA, 2 Live Crew and Eazy E.

Nearly two decades later, Pretty Boy Gangsters’ Korvel Sutton is in the news again as he takes on Apple. Sutton claims that the Cupertino-based company is illegally distributing his music worldwide by including it in at least ten compilation albums.

This week Sutton, who hasn’t hired an attorney but is representing himself, filed a lawsuit at the U.S. District Court in California. In the brief complaint obtained by TorrentFreak he explains that Apple’s iTunes Store is selling several of of his tracks without permission. The works are being offered in 23 territories but according to Sutton, Apple is doing this without the necessary permission.

Attached to the complaint Sutton introduces several pieces of evidence including a copy of the U.S. copyright registration and a photocopy of the “Rollin Like a Star” cassette tape. He further provides the Court with the full list of compilation albums where his rights are being infringed, including “2 Live Crew & Posse“, “West Coast Posse 1” and “Elektro Hip Hop Party Vol. 3.”

A copy of the cassette is provided as evidence. 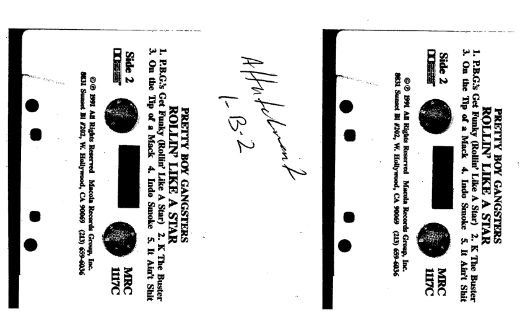 According to information provided by Apple in an email, the disputed compilations were provided by the Dutch label Rams Horn Record. Interestingly, this not the first time this label has been involved in a copyright dispute. In 2004, Rams Horn lost a lawsuit against none other than Eminem for distributing his music without permission.

If Sutton’s claims are correct, Apple can be held liable for several copyright-related offenses for their part in illegally selling Pretty Boy Gangsters tracks. However, from the looks of it Rams Horn Record – who are not named in the lawsuit – may play an even bigger role as they provided the compilations in the first instance.

It is not an isolated incident for an artist not to get their cut when money is made from compilation albums. In Canada a group of artists won a class action lawsuit against Warner Music, Sony BMG Music, EMI Music and Universal Music for unauthorized use of their music in compilation albums. Together the labels pirated 300,000 tracks, for which they had to pay the artists $50 million in damages.

Whether Apple are found guilty or not, it is unlikely that the lawsuit will put a dent in the company’s healthy revenue streams. Unlike other copyright lawsuits we’ve seen in the past, Korvel Sutton is not asking for hundreds of thousands of dollars.

Instead of claiming outrageous statutory damages, he simply wants complete payment of all royalties owed to date.