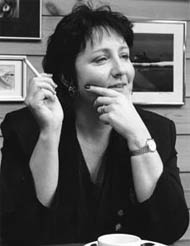 This weekend Dagens Næringsliv ran an article about book piracy in which they interviewed 19-year-old Christian Berntsen, a self-confessed book pirate with eyes on the big time. With desires to become “one of the big boys”, Berntsen admitted to running servers in Lithuania which he believes are safe due to their location.

“Books are priced too high,” said Berntsen when justifying his work. “One of the reasons why the pirate world is so big, is that publishers take crazy prices for something that isn’t even in physical form.”

To counter his viewpoint, DN also interviewed Anne B. Ragde, an award-winning author. Unsurprisingly, Ragde isn’t a huge fan of eBook sharing. In order to thwart piracy, she refused to allow her latest novel to be released as an audiobook since the format is popular with file-sharers and also denied the publication of Russian and Chinese versions.

“Piracy scares the hell out of me. I do not know what to say. I lose sleep at night over it,” said Ragde. “I have figured out that I’ve lost half a million kroner ($72,500) on piracy of my books, maybe more.”

Like many who oppose file-sharing and other forms of copying, Ragde goes on to equate copying with theft and shares her sympathies with those in the music industry.

“I can not stand the thought of someone stealing something. I look at Norwegian musicians who have to do live concerts. We have nothing to live on other than the physical product,” she said.

In response to a question about her habits when it comes to buying or otherwise acquiring copied or counterfeit items, Ragde’s anti-piracy halo slipped more than a little.

“Pirated handbags? Yes, I do buy them,” she said. “I feel that the genuine Prada bags have such an inflated price.”

Ragde then reportedly went on to list many other items she’s bought legitimately but was kindly assisted with a further confession by her son, Jo. If her halo had slipped with the bag admission, it was now set to strangle her.

“You have a pirated MP3 collection,” Jo added, helpfully. “We copied the first 1500 songs from one place and 300 from another.”

“Yes,” admitted Ragde. “There were a lot of things on the iPod.”

Olav Torvund, a professor at the Center for Law at the University of Oslo slammed Ragde as having a set of double standards.

“You’d think that a writer whose income is completely dependent on her rights being respected, would also respect the rights of others,” Torvund said.

“When Anne B Ragde exposed her double standards and made a fool out of herself in Dagens Næringsliv as she did, she has only one thing left to do: Buy the 1800 music tracks that she downloaded to her iPod, so that musicians and composers get their rightful royalty.”

“Burn the counterfeit bags. And come with an apology to all those whose rights she has violated.”

In a follow up to the revelations published in the interview, Ragde tried to defend herself by saying the quotes had been taken out of context. She also went on to blame the music piracy on her son while insisting she’s always been against illicit file-sharing.

“The stuff on my ipod is not representative of my relationship with the music industry and the products they produce. I pay for my music,” she insisted.

Ragde says that the ipod is in storage somewhere in her cottage so when she goes there to celebrate Christmas she will pull it out and delete all the music.

And as a reward for his ‘help’ with the interview, little Jo’s presents will probably be hand delivered by Ebeneezer Scrooge this year.