For many digital pirates the Internet is a playground, a place where they can do as they please without fear of retribution. While that assertion has become less valid as the years have progressed, acts of sharing defiance are still commonplace.

With the ‘War on Sharing’ apparently impossible to win by force alone, various educational campaigns have been launched by the entertainment industries in the hope that pirates and would-be pirates will eventually see the error of their ways.

In the UK one such project from Creative Content UK is known as Get it Right From a Genuine Site. While yet to achieve significant mainstream exposure, the overall campaign is head and shoulders above the offensive and aggressive campaigns of years gone by.

Whether the millions being spent by the government will have the desired effect is unknown at this point, but those behind the campaign have already taken measures to ensure that it doesn’t get sabotaged.

UK music group BPI owns the GetitRightFromaGenuineSite.org domain but to be doubly sure there are no imposters the group has also bagged at least 17 others, including the .audio, .band, .biz, .com, .digital, .email, .foundation and .net variants.

TF discovered these domains while trawling through WHOIS records this week but it was more of a surprise to see that the BPI had also grabbed a bunch of ‘pirate’ versions too. As can be seen below, the BPI has secured the opportunity for people to GetitRightFromaPirateSite too. 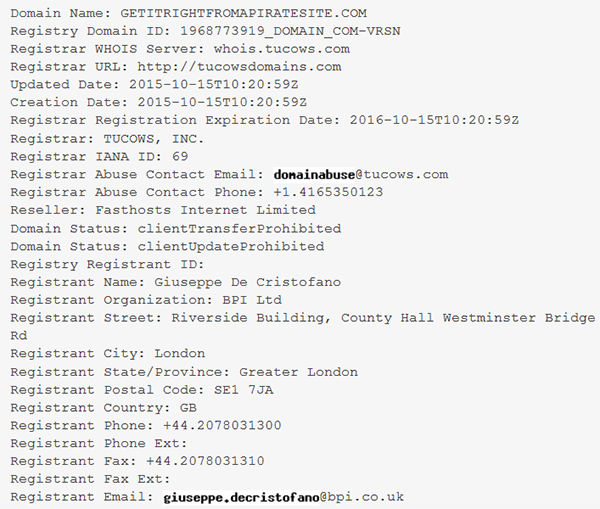 Of course, the chances of the BPI turning its hand to torrent and streaming site promotion are somewhat slim so there must be an alternative reason for it securing not only this .com variant but also many, many more.

We spoke to the music group who confirmed that their intention was indeed preventing abuse of the ‘Get it Right’ campaign.

“It’s standard practice to adopt in respect of brands or major campaigns or initiatives,” a BPI spokesperson said.

“It gives options should alternatives ever be required and also helps to reduce possible abuse.”

The BPI’s strategy here is pretty sound as this kind of thing has happened in the past.

But while a notional threat of sabotage remains in 2016, it seems much less likely today than it did several years ago. It’s true that millions of people are currently sharing content every day but the stunts carried out by activists during file-sharing’s golden years have largely disappeared.