YouHaveDownloaded is a great resource that reveals what people behind an IP-address have downloaded on BitTorrent.

The founders of the site developed the service so people can show what others have been downloading.

Over the past weeks we’ve used the service to expose the most fierce defenders of copyright, and today the focus is on Canada, where the government is preparing to ram through a revamped copyright bill.

The Conservative majority government has reintroduced the Canadian Copyright Modernization Act Bill C-11, which according to experts will have disastrous consequences for consumers.

But while politicians are taking a stand against piracy, staffers at their very own parliament are downloading torrents left and right.

Several IP-addresses assigned to the Canadian House of Commons have been caught pirating copyrighted material.

A copy of the game Need for Speed for example, the film Loosies, very expensive software from Adobe and a leaked version of Noel Gallagher’s High Flying Birds. 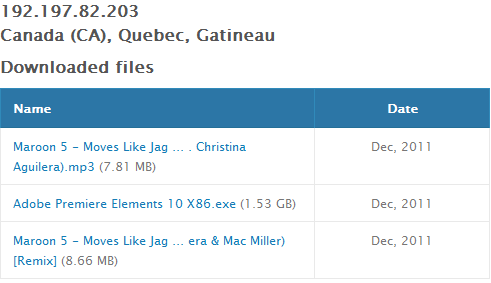 The Canadian parliament is in good company though. Previously we were able to show that unauthorized downloads occur even in the most unexpected of places, from the palace of the French President, via the Church of God, to the RIAA and the US House of Representatives. Ironically, the RIAA blames another company for pirating though their IP-addresses.