Every week TorrentFreak receives emails from individuals trying to find out the status of sites all over the world. Many disappear without warning and with no Facebook or Twitter updates, users naturally fear the worst.

Just lately a lot of torrent-related sites have been under DDoS attack so temporary disappearances have been nothing out of the ordinary, but when a site goes down and stays down for a few days or more, things begin to look more serious.

One site currently affected by prolonged downtime is XtremeTV.org but for users of this site there will be no happy ending. Along with related sites MazysMadhouse and ParadiseLane, XtremeTV has fallen victim to the long arm of Hollywood, reaching across the Atlantic via local anti-piracy group FACT.

“The domains listed [in your email] are part of our ongoing activity to disrupt pirate websites and to create an effective deterrent to operators of such sites,” FACT Director of Communications Eddy Leviten told TF.

Direct confirmation from FACT aside, signs that the anti-piracy group have shuttered a site are not too hard to find, if one knows how they operate.

In cases we’ve covered previously, FACT employees have turned up on the doorsteps of admins or staff demanding they close down sites. FACT has plenty of resources so obtaining an address to visit is not usually that difficult, if they set their mind to it.

However, for some unknown reason there are plenty of site operators who make it very easy for FACT. In several recent cases, queries on the affected sites’ WHOIS entries has revealed the site operators’ names and addresses, completely unprotected.

While revealing WHOIS reports can indicate that FACT might have been in town, there is another more obvious sign – FACT’s email addresses embedded into domain entries.

In previous cases as well as the one involving XtremeTV and MazysMadhouse, [email protected] is now listed as the site’s contact email. This is because FACT demands the sign over of the site’s domain as part of the settlement agreement. Once the domain is in FACT’s hands it is shut down, taking the site with it, if that hasn’t gone offline already. 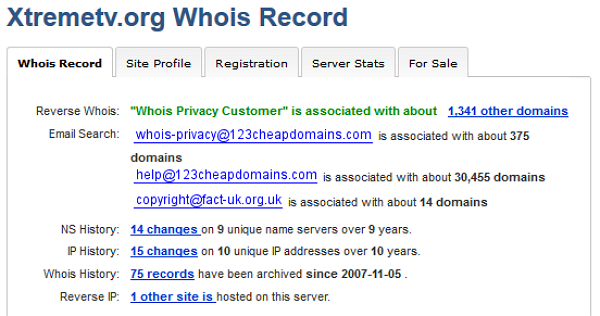 “We continue to direct visitors to domains signed over to FACT to legitimate resources where they can enjoy films and TV programmes in the cinema, online and on disc,” FACT’s Eddy Leviten told us.

“Investigators at FACT have been examining your site and have noted that it is predominantly infringing TV content that is being made available,” FACT Director of Investigations and Intelligence Peter O’Rourke told the site in an email. “FACT requests that you desist from this activity immediately. Failure to do so will result in further investigation which may result in criminal prosecution.”

The perfectly understandable response from the site was put personal lives first.

“We are no longer under the radar. And therefore we also need to dip out. Remember we have lives and families,” the site’s operator said in a statement. “Sorry folks. Hope you all understand that this is out of our hands.”

All of the sites listed in this article are now closed and signs suggest that FACT will continue to close more, as long as site operators can be identified or simply convinced that prosecution and/or imprisonment is a serious possibility.