Following the shutdown of Megaupload in January and comments made by Paramount Pictures’ vice president for worldwide content protection on Friday, both Wupload and FileServe have effectively exited the file-sharing business.

FileServe initially disabled all 3rd party sharing and discontinued its rewards program back in January following the Mega raids. Although the affiliate program never returned, users reported that sharing had been re-enabled. Nevertheless, traffic continued to nose dive. 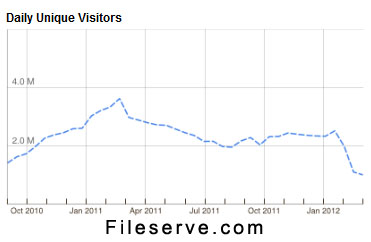 But now, after being called a “rogue site” by Paramount last week, FileServe has reinstated the full ban. Users trying to access files uploaded by others are now greeted with the following message.

Wupload announced in November 2011 that they would discontinue their affiliate program and as can be seen from the graph below, that took a toll on their traffic. 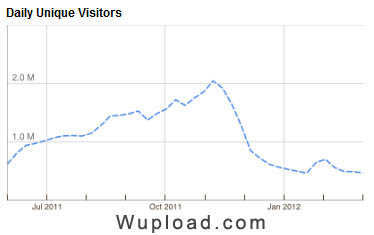 However, according to a new announcement from the site, Wupload is now withdrawing from the file-sharing business altogether.

Like FileServe, Wupload will now only offer cloud storage for people to access files they personally uploaded. Time will tell how that affects their business in the months to come.

Also mentioned last week by Paramount was PutLocker. TorrentFreak spoke with its operator and our report can be found here.