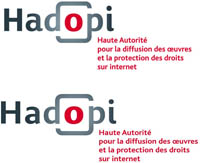 Starting in the spring, French file-sharers are set to be tracked and firmly dealt with by the country’s controversial Hadopi agency.

Late last week at a ceremony in Paris, Frédéric Mitterrand, French Minister of Culture and Communication, unveiled Hadopi’s new logo, the emblem which will help – at least as far as the government and copyright holders are concerned – strike fear into online pirates and force them to change their ways.

It soon became clear, however, that there was a fundamental problem with the design. The logo, already officially registered for 2 months with the National Institute of Industrial Property, had been created with an unlicensed font called “Bienvenue.”

This font was originally created by an employee of France Telecom in 2000, designer Jean-François Porchez. Writer Julien L from French news site Numerama told TorrentFreak that the problem goes even deeper.

“The problem is, this font was an ‘exclusive corporate typeface’. It couldn’t be used for other purposes than France Telecom/Orange products,” he told us.

The creator of the font confirmed that the ‘d’ and ‘p’ had been slightly modified and the rest of the font stretched slightly, but this wasn’t enough to class it as a new design.

Numerama contacted Plan Créatif, the agency which created the Hadopi logo, and they confirmed that ‘their’ font indeed violated the rights for the Bienvenue font, but that it was a mere “error of manipulation.”

Yesterday there was panic, as Hadopi tried to repair the damage by sourcing new matching fonts they could license legally.

Their design agency approached two British companies, Fontsmith and Jeremy Tankard Typography, to buy the ‘FS Lola’ and ‘Bliss’ fonts, and proceeded to hurriedly to license these fonts and recreate the logo.

Hadopi has issued an apology through gritted teeth, but while France Telecom-Orange has confirmed it won’t be taking legal action over the infringement of its rights, the same cannot yet be said of Jean-François Porchez. He has contacted his lawyer to see what can be done.

That’s one huge embarrassing first strike for you, Hadopi.