Under the DMCA copyright holders have the right to demand that websites disable access to infringing content. Without doubt, one of the top recipients of these notices is Google.

To give the public insight into the scope and nature of this process, Google started to publish all takedown requests online as part of their transparency report. Since then, the number of URLs Google is being asked to remove has grown rapidly.

Last week Google received takedown requests for a record-breaking 719,415 URLs, which is double the amount that were sent in two months ago, and four times as many as in January of this year. Google’s data further reveals that Microsoft and the RIAA are the most active senders. 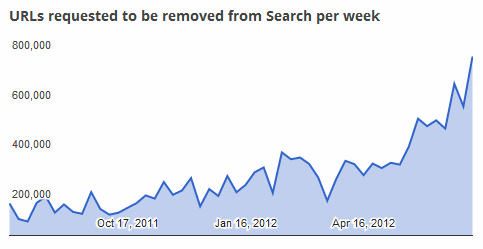 For the copyright holders the purpose of these takedown requests is to make pirated content unavailable through Google’s search engine. This happens through automatic takedown tools, with the unfortunate consequence that legitimate movie trailers and IMDB or Last.fm pages are censored too.

But, there is another issue that casts doubt over the effectiveness of the process.

Because Google indexes all takedown requests with the “infringing” URLs on the ChillingEffects website, the search engine is effectively building the world’s largest database of links to pirated content.

Around the same time next year, Google will have built a database of dozens of millions of pirated links, and a few years later it will be a billion links. Not just links to BitTorrent sites, but also files hosted on cyberlockers, blogs and a wide range of other websites all collected in one place.

Of course, Google’s search engine already indexes pretty much the entire Internet, but a database dedicated to infringing content opens up the possibility for outsiders to mine this data for pirate search engines. And that’s just one of the problems with Google’s transparency.

Disabling access to these “pirate” lists is harder than it seems.

Since all the takedown requests are published online, the URLs in question can still be found through Google. This irony leads to the absurd situation where copyright holders (intentionally or automatically) ask Google to take down their own takedown requests. 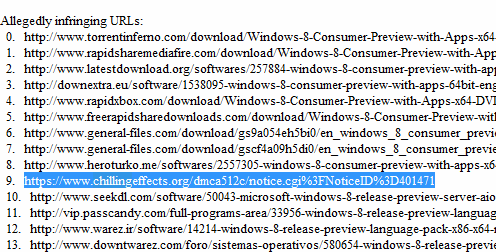 Microsoft and others have already sent such takedown-takedown requests. In other words, Google is being asked to remove links to takedown requests, because these link to sites that link to copyrighted material. And even that is not enough.

Because the new takedown notice creates a link to the old notice, copyright holders have to send another request to take the new one down, followed by another… and another. A comical display of meta-censorship which could go on endlessly.

Of course, spamming Google with takedowns is much easier than contacting individual sites but as these companies should know by now, it doesn’t get rid of the infringing content. In the meantime, these same copyright holders are assisting in the creation of the world’s largest database of links to pirated content, courtesy of Google.