Fung signed a $110 million settlement with the MPAA and planned to shut down the site Tuesday night as stipulated in the agreement with the movie studios.

The unexpected settlement took many of the site’s users by surprise, and yesterday we reported that a group of “rogue archivists” was working on a full backup to preserve a piece of Internet history. Unfortunately for them, isoHunt’s founder didn’t think that this was a very good idea.

A few hours after the news broke, isoHunt took down the server where the torrents were stored. By early Monday morning the entire site had been replaced with a farewell note to the site’s visitors.

“This is it. We are shutting down isoHunt services a little early,” Fung wrote.

IsoHunt’s owner explained that the early exit was a direct response to ArchiveTeam’s backup attempt, but it’s unclear if it was his own decision or whether the MPAA’s lawyers pushed for it.

“I’m told there was this Internet archival team that wants to make historical copy of our .torrent files, I’m honored that people think our site is worthy of historical preservation, but the truth is about 95% of those .torrent files can be found off Google regardless and mostly have been indexed from other BitTorrent sites in the first place,” Fung notes. 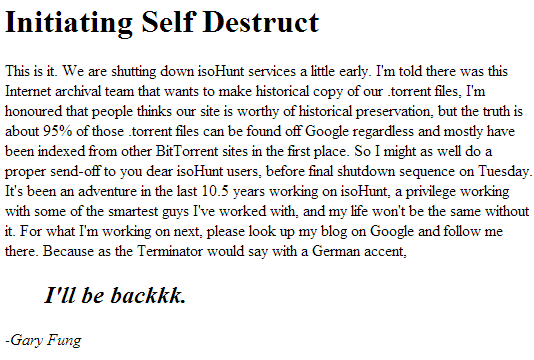 Fung is right and of course all isoHunt torrents are also backed up by the torrent cache services Torrage and Zoink. However, all other metadata and comments appear to be gone for good. The ArchiveTeam managed to grab 242 gigabytes of data, but most is still missing.

ArchiveTeam’s ‘joepie91′ told TorrentFreak that the main goal of the backup was not to copy the torrents, but all the metadata surrounding it including user comments and file-info. He is nonetheless proud of what the team of volunteers got done in such a short time-span.

“I’m disappointed to see that we didn’t manage to archive all of isoHunt, of course, but I am quite happy to see how many people helped out, and what kind of a result it has had – 29 million IDs checked in some two days is still incredible,” joepie91 says.

This partial backup will be posted on the Internet archive in the near future and announced on the #archiveteam IRC channel.

“One last but quite important remark I want to make, is that I think Gary might have misunderstood the purpose of the archiving project; he basically states that “the .torrent files can be found elsewhere too” – but this completely misses the point, being the archiving of the metadata *around* those torrents, such as user comments. These cannot be replicated from other sources…

Fung, meanwhile, used the early shutdown to deliver a “proper send-off” to the people who’ve used his site for many years.

“It’s been an adventure in the last 10.5 years working on isoHunt, a privilege working with some of the smartest guys I’ve worked with, and my life won’t be the same without it. For what I’m working on next, please look up my blog on Google and follow me there.

“Because as the Terminator would say with a German accent, ‘I’ll be backkk’,” Fung said, before Rickrolling the already distressed users….