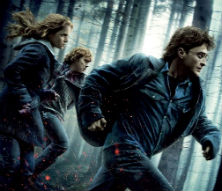 Harry Potter and the Deathly Hallows: Part 1 is the first half of the two part finale of the Harry Potter film series. The film is set to premiere worldwide this Thursday and is expected to gross over a billion dollars in the weeks and months ahead.

Harry Potter films generally generate quite a lot of buzz on BitTorrent as well. Last year, Harry Potter and the Half-Blood Prince ended up in our ‘most pirated movies‘ list with close to 8 million downloads. It is expected that the new film will eventually be downloaded just as much, or more.

Even before the leak, already thousands of people have been searching for a copy of the film online. Yesterday, it was the most searched for film on some torrent sites, which is quite unusual for a title that has yet to be released in theaters. Today, many of these searchers may get excited by the discovery of a partial DVD screener which came out a few hours ago.

Released by the group iNK, the leaked copy is not a usual DVD screener. Yes, the watermarks and other screener features are there, but instead of the full film the leaked copy only covers the first 36 minutes of the highly anticipated release.

Since no full version has followed up until now, it has to be assumed that the source for this leak was only a partial screener. It is not unlikely that it may have been intentionally time-limited because the studio feared a leak, as indeed happened.

A good move, since this leak may actually benefit the movie instead of hurting it.

Warner Bros. Pictures is usually none too fond of leaks, especially if a film gets out before it premieres in theater. However, today’s leak may actually benefit the movie and boost theater attendance, as long as the full version doesn’t leak out too. If the first half hour is compelling enough, people will have to go to the theater and pay for a ticket to see the rest.

It may be going a little bit too far to suggest that Warner Bros. leaked the film intentionally, but from a business perspective it might make sense.

This is not the first time that a Harry Potter “Deathly Hallows” leak has caused controversy. In 2007 a scan of the Harry Potter and the Deathly Hallows book was posted online before it hit the book stores, and was then quickly transcribed by fans.

Update: Warner Bros. released the following statement in response to the leak: “This constitutes a serious breach of copyright violation and theft of Warner Bros. property. We are working actively to restrict and/or remove copies that may be available. Also, we are vigorously investigating this matter and will prosecute those involved to the full extent of the law.”