For years the entertainment industries have been complaining that online piracy is hurting their revenues.

The problem has motivated people to start anti-piracy companies such as Rightscorp, a company which uses standard DMCA takedown requests to send settlement offers to alleged copyright infringers.

Rightscorp today announced that it has completed an alternative public offering (APO) and has begun trading on the OTCQB under the ticker RIHT. In addition, the company finalized a $2 million equity financing, money that will be used to expand its patent-pending technology so it can handle more clients.

As an anti-piracy outfit Rightscorp operates in between the Copyright Alert System and the mass-BitTorrent lawsuits that are now common in the United States. The company tracks down copyright infringers and sends settlement requests to Internet providers, who forward them to their customers.

The typical settlement request is $20 per copyright infringement, but this sum increases if pirates continue to share the file after they received the first notice. For music albums every song counts as a single offense, which means that an album of 10 tracks can cost $200.

Rightscorp has a wide variety of clients, including Warner Bros. and BMG. Talking to TorrentFreak, the movie studio previously said that it uses the settlement approach to complement their anti-piracy efforts for customers whose ISPs don’t participate in the Copyright Alert System. 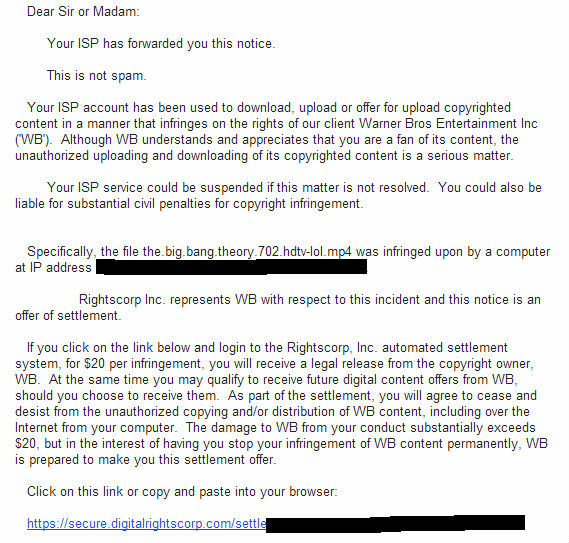 Rightscorp CEO Christopher Sabec tells us that their approach is not only more effective than the Copyright Alert System, but generates revenue at the same time.

“The Copyright Alert System is simply not scalable. On October 26, 2013 there were 47m active peers on the Pirate Bay trackers,” Sabec says.

“Recent stats show that there are hundreds of millions of monthly BitTorrent users. Without a model that recoups revenue from the infringers, a CAS-style system would have extraordinary costs to handle even 10% of the BitTorrent traffic.”

On the other hand, Rightscorp believes that their approach is fairer than mass-lawsuits, which cost alleged pirates thousands of dollars in settlement fees.

According to the company the copyright holders they represent will only take legal action against subscribers who ignore all warnings and continue to share pirated files for three months.

“The mass lawsuit approach is problematic because there is no appearance of due process to the public. With Rightscorp, if a copyright holder chooses to sue someone who received 90 of our notices over 90 days and continued file sharing, they had ample warning to stop file sharing,” Sabec tells TorrentFreak.

“We believe that our notice approach appears much more fair than someone getting sued with no warning. With the current mass lawsuit paradigm, people are sued for millions of dollars after having never received a warning. The public seems to feels that is extreme and unfair. We believe we fix that problem.”

It’s worth noting that Rightscorp announced its public offering on the fifteenth birthday of the DMCA law. As far as we know that’s a complete coincidence.