In the overall scheme of things, arrests for file-sharing are a relatively rare occurrence, particularly given the millions of Internet users who engage in the activity every single day. However, when they do happen they are usually fairly high-profile, conducted by the authorities in a fashion designed to attract the most attention.

A case in Serbia this week is certainly done just that. Last evening Aleksandar Blagojevic, a board member of Pirate Party International, informed TorrentFreak of a situation developing there. In recent times an increasing number of people have been targeted for sharing materials online, but this week the government stepped things up a gear.

Under instruction from the Ministry of Internal Affairs, Serbia’s Counter-Organized Crime Service (SBPOK), the only police unit to report directly at the political level, carried out a raid in the capital Belgrade.

On 1st March, SBPOK broke down the door of 51-year-old Goran Cujak on suspicion that he had made links to the movie ‘Montevideo, bog te video’ (Montevideo, God Bless You) available on the Internet. 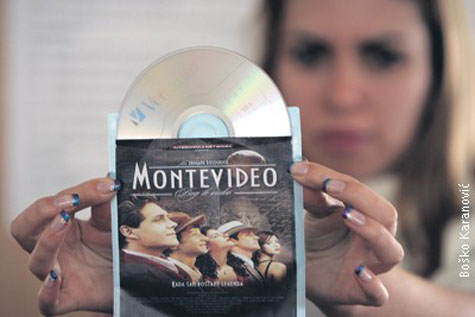 There, a large amount of computer and sundry other equipment was seized and Cujak was placed in handcuffs and arrested for copyright infringement offenses.

“The suspect was a member of one the most popular internet forums [for sharing copyright works],” the Ministry of Internal Affairs said in a statement. “The suspect [posted links to copyright works] to allow others to download movies, music and software material, from domestic and foreign authors, without their knowledge or approval, causing them so enormous material damage.”

At a swift hearing the following day, a judge at the High Court in Belgrade authorized the prison detention of Cujak for up to 30 days, the statement from the Ministry added. This announcement has infuriated the Pirate Party who don’t intend to let the matter pass quietly.

“The Pirate Party of Serbia is unwilling to let this slide just like that, and are organising a formal public protest in Belgrade today,” Aleksandar Blagojevic told TorrentFreak. “Wish us the best of luck! We’re going to need it…”

The protest against Cujak’s imprisonment will begin at 2pm local time in front of the Philosophical Faculty in Belgrade, but if reports are to be believed, further arrests are on the cards. The police say that they will track down the individuals who downloaded the movie from the forum in question and bring them to justice too, although raids on several street vendors have yet to prove productive.

According to Serbia’s PressOnline, Since January 2007, the High Court in Belgrade has convicted 181 individuals for media piracy. Most of them received probationary sentences.