The German Pirate Party has scored a massive win in the elections for the Berlin state parliament today. Two hours after the voting booths closed the first results show the Pirates achieving 9 percent of the counted votes. This translates into 15 parliament seats.

Founded in September 2006, the German Pirate Party has already booked several successes in its relatively short existence. Before today, the party had over 50 members in elected offices across Germany, which is more than in all other countries combined. However, today’s election win trumps all previous ones.

Never before has a Pirate Party been elected into a state or federal parliament. And with the 5 percent floor that was required to enter, the achievement at the Berlin elections is all the more impressive.

Friedrichshain-Kreuzberg was the first region to finish counting, and the Pirate Party got 14.7 percent of all votes there. With all votes counted in the state the Pirates are at 8.9 percent. 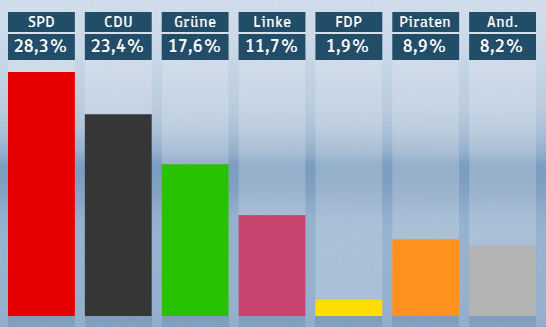 TorrentFreak asked Sebastian Nerz, Chairman of the German Pirate Party, what this success means for the party. He told us that due to an increase in funds and influence the Pirate Party will have a greater chance to make its mark.

“At the moment the Pirate Party of Germany does not have any paid employees,” Nerz says. “Everyone working for the party – including myself – is working in an honorary capacity. In contrast, Members of Parliament are paid for their work. In addition they receive state money to pay for assistents and co-workers. This will enable those Pirates to work full-time for the party, thus giving us much more work force.”

“Another very important benefit is, that citizens and media are taking parties with access to the parliament much more seriously. A number of times i’ve heard, “Your party is not relevant because it does not have members of parliament.” Following this weekend’s successes, in this respect the party’s position will be greatly improved.

In addition the Pirate Party expects that their heightened profile will lead to an increase in members and more people working for the party. As for the party’s ideals, they want to be as transparent as possible, secure the privacy of citizens, abolish patents and limit the ever growing control of copyright exploiting organizations.

“We are going to demonstrate that it is possible to conduct a transparent approach to politics. Traditionally politics are a secret ‘no trespassing’ area. Meetings are held behind closed doors, agendas and protocols are closed, treaties are not being published,” Nerz told TorrentFreak.

One thing’s for certain. The German Pirate Party scored a sensational win today. As a result, the Berlin state parliament will undoubtedly notice the fresh wind coming from the most technology-friendly and privacy preserving party out there. All the Berlin candidates are ready and eager to start according to the chairman.

“In short: We are going to demonstrate that politics can be reformed,” Nerz says.

The election win is currently being celebrated by hundreds of Pirate Party enthusiasts in Berlin, including the founder of the Swedish and first Pirate Party Rick Falkvinge. Rick already predicted the massive win yesterday and shared a picture of the festivities with TorrentFreak. 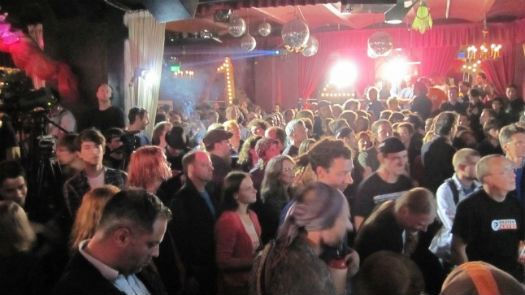 “Pirates of Berlin, thank you for your fantastic work in making tonight happen. We all stand shoulder to shoulder in fighting for the next generation — one of succeeding is all of us succeeding. Tomorrow, people will look to your success, and the movement will grow yet more. You are the source of inspiration for the next wave of civil liberties activists,” Falkvinge adds in a blog post.

There are 61 comments. Add yours?