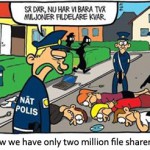 While BitTorrent is considered the king when it comes to obtaining video online, there are other ways to obtain content that eclipse it in ease of use.

So-called ‘streaming’ sites have grown massively in popularity in recent years, largely due to the way they’re presented. Rather than the text-heavy indexes associated with large volume torrent sites, streaming portals present the latest movies and TV shows in a user-friendly interface with plenty of graphics.

What’s more, for the novice ‘pirate’ these sites are simplicity itself. Find a movie, click it, deal with the pop-ups, and in a few moments the latest blockbuster plays in a browser-based YouTube-style window. Even the Swedes, largely proud supporters of The Pirate Bay, have embraced the concept. Sadly for them, however, they’re now one sizable portal down.

In the wake of The Pirate Bay raid in December, Swedish police intensified their focus on one of the country’s top streaming portals, Dreamfilm.se. The site had been growing in popularity for some time but it appears that in recent weeks police had been homing in.

Early January everything seemed fairly normal when the site ran a promotion offering 100 movie tickets to fans who shared the picture below on Facebook. Plenty of people participated.

On January 14 the site published the Facebook links of 100 winners and requested that they send in their names and addresses to claim their prizes. But just a few weeks later and it’s now all over for Dreamfilm.

“After an administrator was detained and interrogated, it has been mutually agreed that dreamfilm.se will be shut down for good,” the site reveals in a statement.

“The police gave us an ultimatum, to shut down the site and be free, or to keep it online and be detained again.”

It seems that after an extended period trying to close the site, the authorities finally had the upper hand.

“Following controversial interrogation methods it was decided that the site and everything to do with it will be shut down for good. With this, all other administrators decided to resign altogether from the site’s operations with immediate effect,” the site’s operators add.

Thanking users for their dedication over the years, the admins bid farewell to the site and its members. Well, sort of…..

It appears that while some of the site’s admins agreed to close down the site, others did not give the police the same undertakings. They have now broken ranks and created a brand new venture. Today, DreamFilm.se is dead but DreamFilmHD.com lives on in its predecessor’s form.

“By the way, if you are film-goers, then that part of the crew who chose not to resign cloned [DreamFilm.se] to continue on their own,” the former admins say. “The administrators of DreamFilm.se do not in any way endorse this move, but the site is available at: DreamfilmHD.com.”

Sure enough, the replacement site at that address is more or less identical to the site now closed down following an agreement with the police. How this will be viewed by the authorities remains to be seen, but it’s a safe bet that this outcome wasn’t the one they’d hoped for.

At the time of publication Rights Alliance, the anti-piracy outfit behind most file-sharing site complaints in Sweden, had not responded to TorrentFreak’s request for comment.

Supreme Court to Rule Whether Pirate Streaming Damages Are Fair