The application has some of the major media giants worried, including Netflix which sees the pirate app as a serious competitor to its business.

Increasing this threat, Popcorn Time has now taken the top spot in Google search results, a position that used to be held by the popular movie snack “popcorn“.

For years, the Popcorn Wikipedia entry has been listed as the number one result but it has now been replaced by the Popcorntime.io website.

Results may vary based on location, but TF has confirmed that the pirate app has seized the top spot in the US, UK and the Netherlands. The screenshot below shows Google’s results from California.

Popcorn Time’s domination is not shared on Bing, where the app is nowhere near the top results. 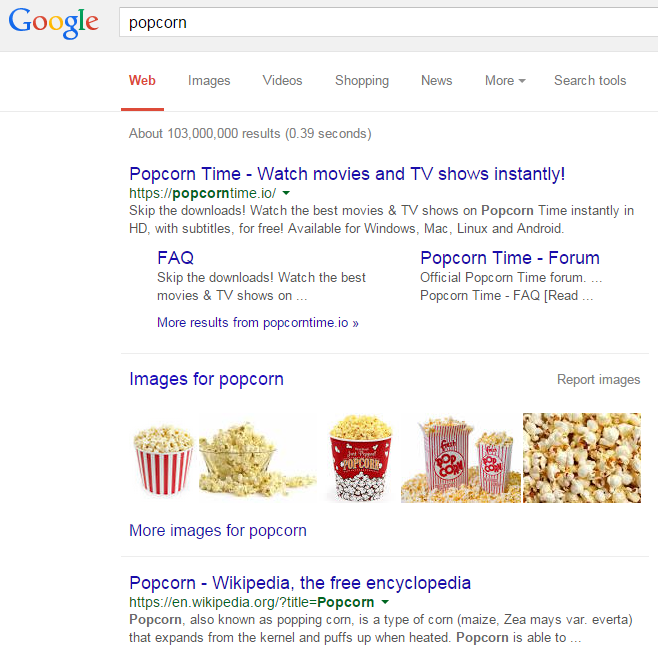 In addition to the top listing, Google’s Autocomplete feature also favors Popcorn Time over the snack. Just entering the three letters “pop” is enough for the suggestion to appear.

It’s unclear why Google favors Popcorn Time over Popcorn, as the latter is still more sought after in the search engine. Perhaps the recent rise of the application and the many online discussions have something to do with it.

Whatever the case, Hollywood is not going to be pleased with how Google algorithms have pushed Popcorn Time into the limelight.

The MPAA has been complaining bitterly about pirate sites outranking legitimate content, and they’ll see this recent example as yet more ammunition to keep pushing. So get the popcorn ready!