In a recent interview the the Spanish newspaper El Pais, Richard Stallman says that the public should disobey Spain’s new anti-piracy law.

“It is as unfair as Sarkozy and Berlusconi, and should be disobeyed by users,” Stallman says referring to The Sinde Act.

“How many authors writing earn money to pay his expenses? A hundred, five hundred? Is that enough to restrict freedom of all? Collecting user’s private data should only be legal with a court order when there is suspicion that someone is preparing a crime. Non-commercial file-sharing should be legalized. It is a fundamental freedom.”

Stallman further commented on his hair (“my long hair was a political decision”, and his baby (the Free Software Foundation), which he says accomplished more than most real kids.

“I have no family and did not want to have children because the children push you desperately seeking more money.”

“My son is the Free Software Movement, and I believe that it contributed more than other human children to make the world a little better. It is true that copyright is only a secondary area where one can see that democracies are ill because they are sold to corporations. But it is important because the freedom of many people is at stake.” 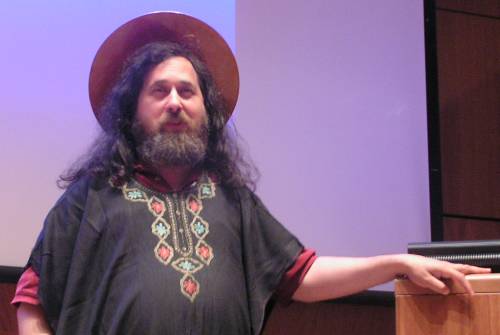