One of Pirate Bay’s Oldest Torrent is “Revolution OS” 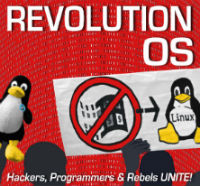 Later this year The Pirate Bay will celebrate its 10th anniversary. Quite an achievement for a site that has been dragged into lawsuits for the better half of its existence.

Looking ahead we wanted to discover the oldest active torrent to have survived all of these troubles.

After digging around for a while we found that the honor goes to a pirated copy of the documentary “Revolution OS.” The torrent in question was uploaded March 31, 2004. (correction, see update below)

At the time there were only a few hundred torrent files stored on The Pirate Bay, compared to more than 2 million today. Over the years just 15 people left a comment on the torrent and at the time of writing it has 27 seeders.

There is some irony in the fact that a “pirated” copy of a movie about Linux, GNU and the free software movement is the longest seeded torrent. Richard Stallman, one of the key figures in the documentary, will be proud.

“It’s definitely a problem, but I guess there’s some satisfaction in knowing that REVOLUTION OS still has appeal for some people twelve years later,” Moore told TorrentFreak. 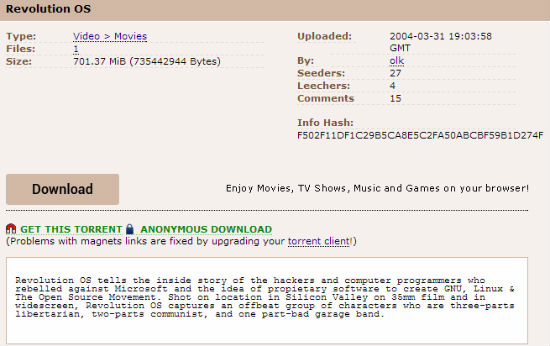 But is Revolution OS also the oldest active torrent overall?

No, that honor goes to another non-mainstream product. The torrent file that has been around for the longest time according to our knowledge is The Matrix ASCII.

We already crowned this one the oldest torrent back in 2005, and as of today it is still active with a few downloaders and seeders. The torrent file in question was created in December 2003 when The Pirate Bay was only a few months old and when Facebook and YouTube didn’t yet exist. Thus far, this torrent has survived a mind-boggling 3,333 days.

Since we’re talking about records we should also mention the largest and smallest torrents on The Pirate Bay. The largest active torrent is an archive of the late Geocities.com, that was shut down by Yahoo in 2010.

The 641.32 GB torrent is currently battling for its survival with just one seeder.

The smallest torrent, just over 3 kb, points to an Adobe Photoshop “crack”. In this case the torrent file itself takes up more disk space than the download itself. With more than 1,000 seeders this one is expected to be around for a while.

Next year the Revolution OS torrent is set to turn 10 years old, and we have a feeling that it will still be around to celebrate its birthday.

Update: The information on the oldest “active” torrent was provided to us by The Pirate Bay, with the criteria that it should have at least one seeder and one leecher. A commenter (vetyu) rightfully points out that there is a torrent that’s a few days older with 1 seeder and no leechers.