In early December 2013 there was a nice announcement for Ubuntu users. Software developer David Callé revealed that a new torrent scope (search addon) for the Debian-based Linux OS was now available.

In the first instance Callé was skeptical about having the scope included in Ubuntu by default since it would inevitably turn up unlicensed content, something he feared would “generate a lot of FUD for Ubuntu.” However, Callé’s fears were quickly addressed by Ubuntu founder Mark Shuttleworth.

“The tool is super-useful and it’s perfectly justified to make it available by default. We use torrents for distributing Ubuntu itself. So please don’t hold back!﻿” Shuttleworth wrote.

We caught up with David Callé to find out more about his torrent experience and what motivated him to create the tool.

“I use torrents to seed ISO images for Linux distributions, Ubuntu of course, but Linux Mint and Fedora as well,” David told TorrentFreak.

“The main motivation behind the torrents scope was to embed Free Culture into the user experience, in the search engine of the OS. In that spirit, I am also pushing for the Jamendo scope (CC licensed music service) to become one of the default music sources.”

Clearly David had Ubuntu’s image in mind when he hesitated over its inclusion in Ubuntu by default. What pitfalls did he foresee at that early stage and has he now changed his mind?

“I still have reservations: the current prototype uses a TPB [The Pirate Bay] backend and is in a very early state in terms of filtering what is presented to the user and how it does it,” the developer explains. 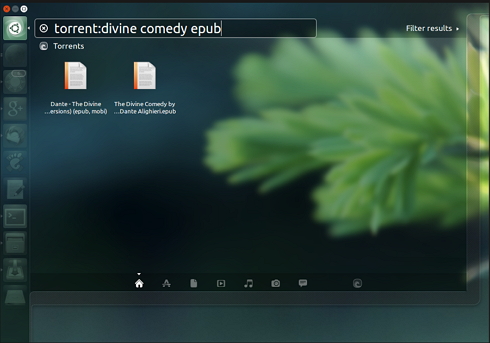 “Since Ubuntu is used in a lot of schools and public administrations, my condition for it to be available by default is to have license filtering, to promote works using an open license and public domain content. The main currencies for Open Source projects are time and interest; seeing people (most notably, the Ubuntu founder) willing to help and support it has made me more confident in reaching that goal.”

While the word ‘filtering’ might cause some concern, David says that any filtering will be switchable so that users are able to get the full BitTorrent search experience if they so desire.

“This may sound like a cliché, but sharing and openness are at the heart of Linux and I don’t think someone could be involved in Linux without caring deeply about the BitTorrent protocol,” he explains. “Its efficiency is also the reason why almost all Linux distributions use torrents to distribute their images.”

Of course, while the torrent scope may attempt some filtering in order to promote open license and public domain content, for users in some countries their ISPs are already attempting to get rid of the whole range of material by blocking sites such as The Pirate Bay. Will there be any attempt to counter this problem?

“The Dash is a prominent part of the Ubuntu desktop and is even more ‘front and center’ in the phone/tablet version. It’s a metasearch engine that aggregates many sources (about 70, such as DeviantART, SoundCloud, Amazon, etc.) and the torrents scope is planned to be one of these,” David explains.

“The current prototype uses TPB results in favor of other sites, because it was fairly easy to implement an adult content filter on top of it. That said, this is subject to change and the project will use any BitTorrent services it can harness to give access to Free Culture and will be available wherever they are are not blocked.”

Time will tell how ‘strict’ the scope will be in the results it returns (filtering is not yet here according to David) but for those looking to support open license material it is certainly one to watch.