When copyright holders feel they have exhausted all options to have websites stop their allegedly-infringing activities, there is a growing trend to move further up the chain.

Sites now regularly have copyright complaints filed against their hosting companies and domain registries, for example, demanding that they take action to prevent contentious behavior. Since millions of websites now use Cloudflare’s services, that makes the CDN provider a prime candidate for pressure. A new case filed yesterday in a Tennessee district court provides yet another example.

American Clothing Express Inc., which does business as Allure Bridals and Justin Alexander, designs and manufactures wedding dresses. As part of the companies’ sales and marketing efforts, they claim to spend hundreds of thousands of dollars per year on photoshoots featuring models wearing their creations.

According to the companies, however, the resulting photographic images are also being deployed by unauthorized overseas websites (sample below) in an effort to drive customers to unaffiliated bridal stores in local markets selling “cheap imitation” dresses. 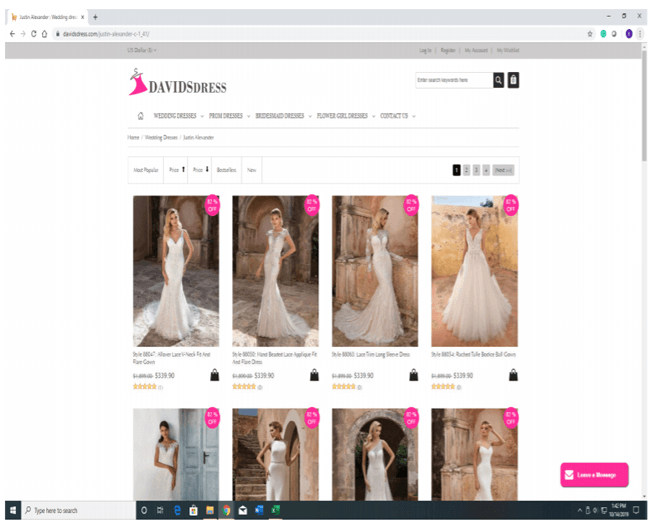 The plaintiffs state that they lack a meaningful remedy against such sites, noting that the majority are hosted on servers in China, other locations in South East Asia, or on offshore servers that advertise their non-compliance with United States’ copyright laws.

The filing lists 99 websites (represented by Does 1-200) falling into these categories that all have something in common – they are or have been customers of US-based Cloudflare. As a result, the plaintiffs have resorted to filing infringement notices with the CDN company, hoping it will take action to restrict the availability of the infringing images.

Indeed, over the past three years the companies claim that they sent several thousand infringement notifications to Cloudflare which included the URLs of pages on the allegedly infringing sites where unlicensed images were being used. The complaint acknowledges that Cloudflare forwarded the complaints to its customers and their hosts but due to the nature of the clients, the hosting providers mostly ignored the takedown demands.

“CloudFlare had actual knowledge of the specific infringing activity at issue here because anti-counterfeiting vendors retained by Plaintiffs delivered more than seven thousand notifications to CloudFlare of the ongoing infringement being prosecuted herein over the course of three years,” the complaint reads.

In common with a similar on-going case in California involving another bridal company, the plaintiffs in this matter also state that Cloudflare should have taken more permanent action when they realized that complaints were being made against the same customers time and again, as illustrated by the sample in the image below. 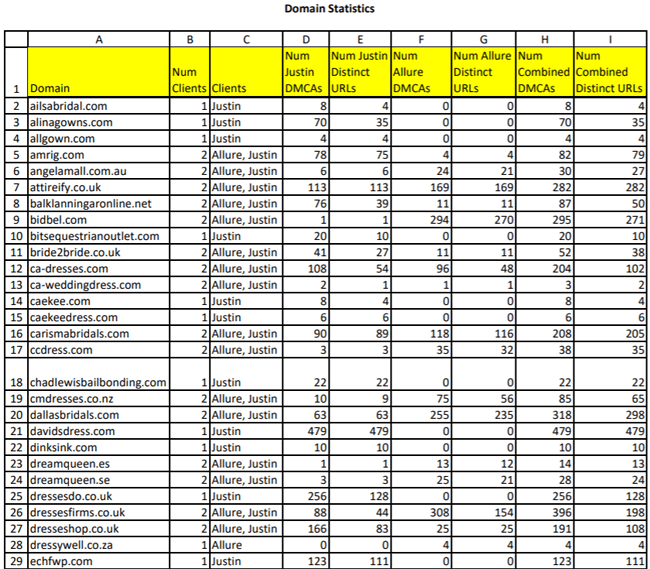 “CloudFlare could have stopped this infringement being perpetrated through its CDN by simply terminating the accounts of repeat infringers,” the complaint continues.

“CloudFlare has never terminated a repeat infringer in response to notifications sent by Plaintiffs or other bridal manufacturers. Consequently, an exceedingly disproportionate amount of websites infringing Plaintiffs’ copyrights are optimized by CloudFlare, as opposed to other providers of CDNs, due to CloudFlare’s well-known policy of refusing to terminate repeat infringers.”

While the plaintiffs don’t mention Cloudflare’s competitors by name, the complaint alleges that in response to similar copyright infringement notices, other CDN providers told their clients that if the images weren’t removed, their entire website accounts would be terminated.

In December 2019, Cox Communications was hit with a $1 billion copyright infringement verdict after a Virginia federal jury determined that the ISP didn’t do enough to stop repeat infringers. Cox was found to be contributorily and vicariously liable for the alleged pirating activities of its subscribers on more than 10,000 copyrighted works.

For comparison, Allure Bridals and Justin Alexander state that Cloudflare is liable for contributory copyright infringement relating to more than 5,000 infringing images published on 99 different websites. Overall, Cloudflare serves many thousands of pirate sites, making the outcome of this and similar cases of particular interest.

In respect of the “willful and intentional” direct infringement claims against the 99 websites themselves, Allure Bridals and Justin Alexander request actual or statutory damages, injunctive relief to prevent the ongoing infringements, and the destruction of all copies of copyright works made in violation of the bridal companies’ rights.

The contributory copyright infringement claim against Cloudflare asserts that the CDN company assisted the direct infringers by storing copies of the infringing images on servers in the United States, improving the performance of the infringing websites, while concealing their true locations.

As a result, Cloudflare’s behavior is also described as “willful and intentional”, with the plaintiffs demanding a similar injunction in addition to actual or statutory damages.

The complaint can be obtained here (pdf)