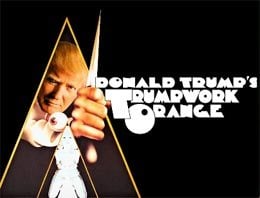 Three weeks ago, Australian Hugh Atkin received a notification from YouTube, advising that a video he’d created had received a copyright strike.

At the time, Atkin told TorrentFreak that the video, titled ‘A Clockwork Trump vs. A Trumpwork Orange’, was intended as a parody.

“It was meant to be a satirical take on the alternately funny/violent/scary/profane/authoritarian nature of Donald Trump’s presidential campaign.”

The claim against Atkin’s account was filed by Serendip LLC, the US-based company that represents Wendy Carlos, the composer of the music in The Clockwork Orange and other classics including The Shining. Atkin indicated to TF that he believed there had been some sort of mistake.

“I have given a DMCA counter-notification through YouTube and am awaiting a response, but, in the interim, I have a copyright strike against my account,” he explained.

We asked Atkin what part of the content the YouTube strike targeted – was it the music, the video, or both? He didn’t know.

“The claim doesn’t actually specify what copyrighted work is alleged to be infringed by my video. The first and only information I found out about Serendip’s claim was when I logged into my YouTube account this afternoon and saw the information in the screenshot below saying that a takedown notice had been received,” he told us in October. 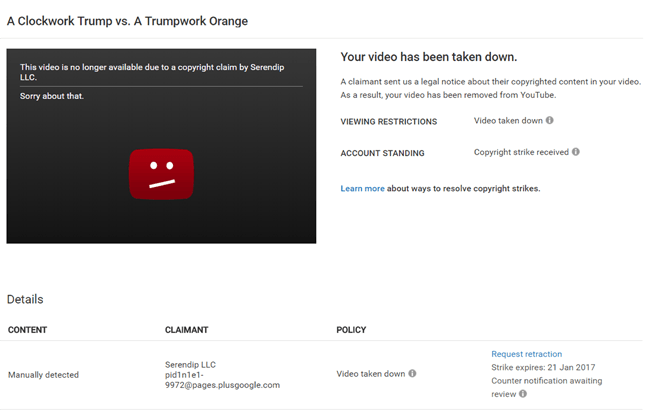 However, the video in question (which is still available here) does utilize Wendy Carlos’ rendition of the William Tell Overture as featured in the movie. At this point, things began to feel very familiar.

Back in the summer, Serendip sued YouTuber Lweis Bond after he had used some of Carlos’ music in a Stanley Kubrick movie analysis. That case seems to have ended relatively amicably, but not before causing Bond considerable heartache. Now, it appears, Atkins is traveling the same road.

In a lawsuit filed in a New York district court, Serendip LLC is now suing Hugh Atkin for the unlawful use of Carlos’ music in his one minute video.

“Unbeknownst to, and without permission or license from Serendip, Defendant made derivative use of Wendy Carlos’s music arrangement and master sound recording works of the ‘William Tell Overture’, in the soundtrack of Defendant’s video, entitled ‘A Clockwork Trump vs. A Trumpwork Orange’,” the lawsuit reads.

It adds that Atkin uploaded the video around October 23, 2016, “with the apparent purpose of monetizing the video for his own benefit, and with his later stated purpose of ‘providing satirical political comment on the 2016 US Presidential Election campaign of Donald Trump’.”

Serendip states that in order for Atkin to have used the music legally, two individual licenses would need to be obtained: a synchronization license for the music arrangement and a master use license for the sound recording. The company claims that together these licenses cost as much as $60,000, although in some cases there is a minimum fee of $5,000.

“However, Defendant did not contact Serendip or Wendy Carlos, or anyone, to inquire about obtaining the required copyright licenses for music use in his video,” the company adds.

Serendip says that it chose to file its lawsuit after Atkin filed his DMCA counter-notice.

“Defendants’s acts of infringement have been willful, intentional, and purposeful, in disregard of and indifferent to Serendip’s right,” it continues.

“As a direct and proximate result of Defendant’s infringement of exclusive rights under Serendip’s copyrights for the music arrangement and sound recording works of ‘William Tell Overture’, Serendip is entitled to statutory damages for each copyright.”

The company also demands a permanent injunction prohibiting Atkin from taking any action which further infringes upon Serendip’s copyrights “including, without limitation, uploading a video containing any such work to YouTube.com or any other website.”

When contacted by TF last night, Atkins had no idea he’d been sued.

“I did not know that Serendip had commenced proceedings against me. I only found out about the suit via your email, which was a rude shock to wake up to on a Monday morning in Sydney. The complaint has not yet been served on me,” he said.

“I received an email from lawyers for Serendip on October 29 in relation to the takedown notification which had been given by Serendip to YouTube under the DMCA and my counter-notification.

“I responded by letter on October 30 requesting further information about the alleged claim of infringement and otherwise denying any infringement. I never received a response to my letter, and my video was restored to YouTube last week. From their failure to respond, I assumed that Serendip was not pursuing its claim.”

As mentioned earlier, this case is very similar to the one filed against UK-based Lewis Bond. That case appears to have been settled somewhat amicably, but the details of any arrangement have not been made public.

From comments made by Serendip it appears that while in some situations a review, parody, or critique might be covered under fair use exemptions, neither Bond’s analysis nor Atkin’s parody directly reviews, parodies, or critiques Carlos’ music itself, only the movie A Clockwork Orange.

“At no time, does Defendant’s video comment on Wendy Carlos’s music in any way,” the lawsuit against Atkin reads.

Only time will tell how this one will end, but it seems very clear that Serendip is determined to defend its rights, even if that means going after relative small fry on YouTube.