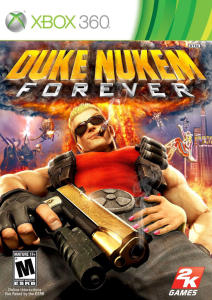 Inevitably though, there has been a big underground push to break that release date embargo.

A little over an hour ago that push was complete with the game leaking to BitTorrent and other file-sharing networks, a full 7 days in advance of the planned launch.

Dozens of fake files claiming to be DNF have been going up for the last two weeks, but this release by Scene group ‘Complex’ is absolutely the real deal.

While this particular writer is a very keen games buyer, this leak and the subsequent reviews could conceivably result in a lost sale for publishers Take-Two Interactive and 2K Games.

Why? Because the limited distribution demo of the game seemed to show that rather than the huge blockbuster we’ve all been hoping for, DNF could be a very big let down indeed.

This leak is early enough to warn people off if the game’s a dud, but for all the Duke fans out there, hopefully the reverse is true.