Despite concerns from BitTorrent elitists that the site was a cesspit of poor quality rips, YTS was one of the world’s most popular torrent indexes for a reason.

Simple to find, publicly accessible, nice to look at and bulging with movies, YTS carried thousands of the world’s most popular titles in an easily digestible, convenient format.

Previously the home of YIFY rips, YTS is no more. The site was shuttered by a multi-million dollar lawsuit filed in a New Zealand court by the MPAA and it won’t ever be coming back.

However, considering the number of tips received at TF this morning you’d think nothing was wrong. Email after email has declared that “YTS is back!!” and in fighting form too.

As can be seen from the screenshot below, it certainly looks like it. 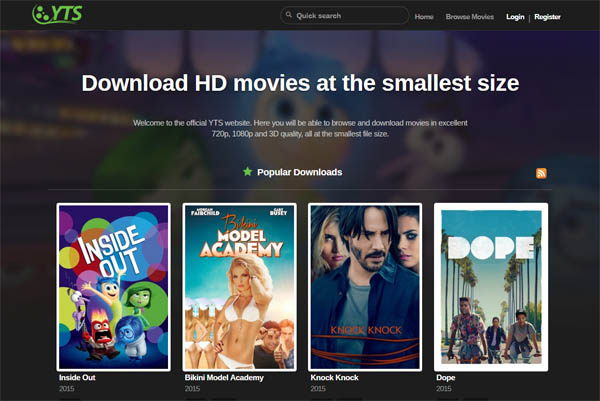 But to the disappointment of all YTS and YIFY fans, the above site is a fake. It’s located at yts.ag and it’s being promoted by the same people who carried out a hostile takeover of EZTV earlier this year.

However, as pointed out by a TF reader, the site does indeed index some old YIFY rips. That may be, but in the same way that EZTV no longer carries genuine EZTV releases, YTS.ag won’t have new ‘genuine’ YIFY rips either, since YIFY is no longer in business.

It’s a blatant attempt to cash in on the void left by the demise of YTS and rest assured it won’t be the last. If they aren’t already appearing, torrent sites will soon be flooded with fake torrents claiming to be from YIFY. They won’t be, guaranteed.

Of course, there’s a certain irony in declaring a clone site as a bad player on the basis that it’s pirating another pirate site’s image. But, nevertheless, if a site can’t make it on its own merits and is prepared to mislead now, who’s to say what other tactics it will employ when it has a nice unsuspecting userbase on board.

Copying is the name of the game, no doubt, but being upfront about it is probably a better long-term strategy.