Gene Simmons: P2P Pioneers Should Have Been Forced into Work Like Nazis 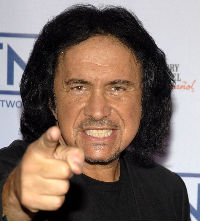 Every few years KISS guitarist Gene Simmons decides that stirring up a hornets’ nest on the topic of music piracy is a good idea.

Back in 2008 he said that children should be harshly punished for obtaining songs for free, noting that “..every little college kid, every freshly-scrubbed little kid’s face should have been sued off the face of the earth.”

Later that year he was back, all doom and gloom and talking openly about the death of the music industry. “It’s six feet underground and unfortunately the fans have done this,” he said.

At the start of 2014, with the music business now finally doing what they should have done more than ten years ago, Simmons is back. But while the record business is slowly changing its tune, Simmons appears to be stuck in the past – and he’s still blaming the fans.

“I still think it’s a crime,” he says in next month’s MetalHammer magazine.

“The sad part is that the fans are the ones who are killing the thing that they love: great music. For fuck’s sake, you’re not giving the next band a chance.”

Simmons, a fierce backer of Metallica when they chose to sue Napster in 2000, says he still believes what they did was right but blames the industry for not locking things down even more.

“Record labels should have stood together and made the Great Wall of China [around music] and sued anybody who transgressed,” he explains, probably forgetting that the former isn’t possible and the latter has already been tried.

As for Napster’s creators, Simmons says they shouldn’t have been allowed to walk away. He believes they should have been given the Kim Dotcom treatment – and then forced into work for the good of the music industry.

“They should have bitch-slapped them,” he says. “Gone down with the FBI, seized everything and put everyone in jail. But then they should have done what the Allies did with the Nazis: made them work for us.”

While Simmons regularly talks about the death of music at the hands of piracy (which still hasn’t happened), it seems to come down to how much the band has lost to illegal downloading.

To have lost millions to piracy suggests that many more millions have been made and there can be little doubt that KISS have done extremely well financially after selling 100 million albums. But for Simmons there’s something that we all have to accept – every one of us is “a capitalist pig.”

“And this is the essence of what unites us all. We all want more. There’s no such thing as never enough. It’s a harsh truth,” he says. “I want to make as much money as possible and then make some more. My conviction is that everyone is just like me.”

Simmons’ anti-piracy comments have made him an unpopular figure amongst tech fans online. In 2010 his website was attacked by Anonymous activists as part of Operation Payback, which resulted in the prosecution of a then 25-year-old from the United States.