Removing search results is nothing new for Google. The company has been cleaning up its search index for years, in response to complaints from copyright holders.

Every week the search engine processes millions of requests. In most cases these claims are legitimate, but every now and then webpages are targeted mistakenly.

This also happened to Mega, the cloud storage site originally founded by Kim Dotcom. For the past few days the site has become unfindable in Google as its homepage is no longer listed (see update below for new info).

Instead, users get the following results, listing various Mega-related pages including the site’s Wikipedia entry.

In addition, they see a mention at the bottom of the page explaining that one result was removed in response to a DMCA request. That happens to be the Mega URL they were looking for. 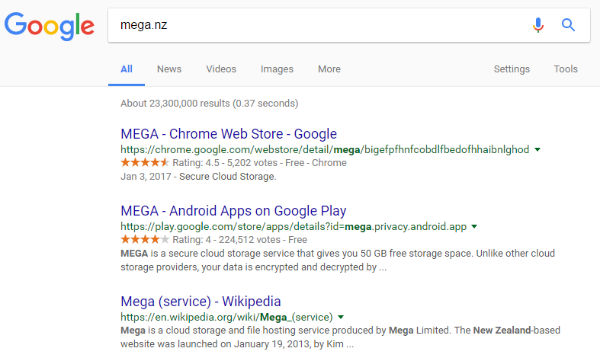 The DMCA notice in question was sent on behalf of Metropolitan and claims that the Mega.nz homepage linked to an infringing copy of the movie John Wick. While there is no infringing material linked on that page, the link was removed from Google’s index.

To make matters even worse, Mega chairman Stephen Hall says that this isn’t the first time that their homepage was removed.

“This has occurred three times In recent months. Each time we file a counter-notice, which is then acknowledged by Google within 2-3 days and the search results are then reinstated 10-14 days after that,” Hall tells TF.

“The notices were filed by agents who are well aware of the DMCA process but clearly aren’t verifying the links as their claimed content is certainly not available at mega.nz.”

Needless to say, the decreased visibility in Google leads to a reduction in search traffic and arguably a dip in revenue as well. All based on one “simple” mistake.

While Google will likely correct the error (again) following a DMCA counter-notification, the incident emphasizes that false takedown requests can do serious harm.

The search giant is generally quite good at spotting mistakes. At the moment, Google rejects roughly 10% of all takedown requests due to a variety of reasons, but it can’t catch them all.

Google has previously noted that it’s keeping an eye on these kinds of mistakes as well as clear cases of abuse, but thus far there is no real incentive for copyright holders to be more vigilant in their takedown efforts.

The U.S. Copyright Office is currently reviewing the effectiveness of the DMCA takedown process and some stakeholders have suggested punishments for clear abuse by rightholders. For now, however, there are no consequences.

Update: The mega.nz URL was reinstated by Google on January 13.