In an open letter to film director Spike Lee designer Juan Luis Garcia accuses the makers of “Oldboy” of stealing his artwork for the movie poster.

Garcia explains that he was invited by an ad agency to create the designs. After putting two months of work into his designs were picked, but a deal was never made since the agency made an extremely low offer for the licensing buyout fee.

According to the designer the ad agency went on to make several threats, and he never saw a penny for the work he’d done.

“They told me that I didn’t want to mess with Spike Lee, that I would never work again, that I was a despicable human, that they wish they never met me, and that they were going to sue my ass to oblivion.”

Garcia didn’t care too much about the lost income and was happy he could put the trouble behind him. However, this all changed quickly this week when he saw the official “Oldboy” poster.

“Last night I was browsing the internet and my jaw dropped when I stumbled upon your personal and your production company’s social media pages. I couldn’t believe that you had been using and claiming copyright on three of those very same posters I designed,” Garcia writes to Lee.

The comparison below explains the designer’s disbelief.

Garcia’s design, and that of the official film poster 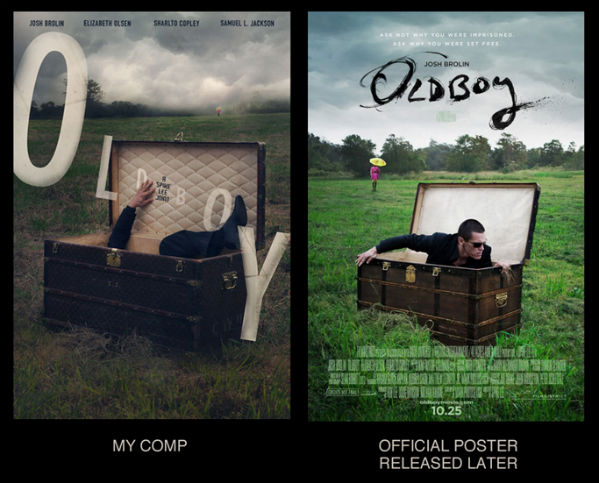 With his open letter Garcia asks the filmmaker to look into the issue, hoping that there might be a possibility to get some recognition.

“I need you to know the truth. Some of the posters you are using were stolen from me. I tried my hardest to resolve this amicably but the agency just blatantly refused. I am a fan of your storytelling and respect your success as a filmmaker, artist, and person,” he writes.

“I hope we can resolve this between us because the agency refuses to work with me and they have tormented me and my family enough. Please feel free contact me at your convenience.”

Unfortunately for Garcia, Spike Lee isn’t really impressed by his cry for help. The film director responded to his letter on Twitter today, showing no grain of sympathy.