With millions of unique visitors per day KickassTorrents (KAT) has become the most-used torrent site on the Internet, beating even The Pirate Bay.

Today, however, the site has run into a significant roadblock after U.S. authorities announced the arrest of the site’s alleged owner.

The 30-year-old Artem Vaulin, from Ukraine, was arrested today in Poland from where the United States has requested his extradition. 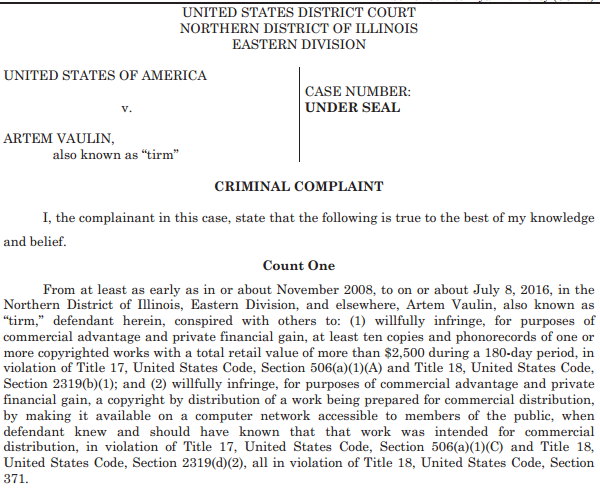 The complaint further reveals that the feds posed as an advertiser, which revealed a bank account associated with the site.

It also shows that Apple handed over personal details of Vaulin after the investigator cross-referenced an IP-address used for an iTunes transaction with an IP-address that was used to login to KAT’s Facebook account.

“Records provided by Apple showed that [email protected] conducted an iTunes transaction using IP Address 109.86.226.203 on or about July 31, 2015. The same IP Address was used on the same day to login into the KAT Facebook,” the complaint reads.

In addition to the arrest in Poland, the court also granted the seizure of a bank account associated with KickassTorrents, as well as several of the site’s domain names.

Commenting on the announcement, Assistant Attorney General Caldwell said that KickassTorrents helped to distribute over $1 billion in pirated files.

“In an effort to evade law enforcement, Vaulin allegedly relied on servers located in countries around the world and moved his domains due to repeated seizures and civil lawsuits. His arrest in Poland, however, demonstrates again that cybercriminals can run, but they cannot hide from justice.”

KAT’s .com and .tv domains are expected to be seized soon by Verisign. For the main Kat.cr domain and several others, seizure warrants will be sent to the respective authorities under the MLAT treaty.

At the time of writing the main domain name Kat.cr has trouble loading, but various proxies still appear to work. KAT’s status page doesn’t list any issues, but we assume that this will be updated shortly.

TorrentFreak has reached out to the KAT team for a comment on the news and what it means for the site’s future, but we have yet to hear back.

Update: More in depth coverage of the complaint here.