How do you top the sales lists at Amazon, a month before your book is released? Do you?

A) Sign up with a major publisher,which may include signing over a substantial percentage of royalties, and possible debt-financing?

B) Or release digital copies online and become a viral sensation?

The answer is B, at least it is if your book is called “Go the Fuck to Sleep”

The book, written by Adam Mansbach, and published by a little known publisher, has sold over 100,000 copies, pushing it to the number 1 spot. It’s so popular, that the publication date has been moved from October to mid-June. 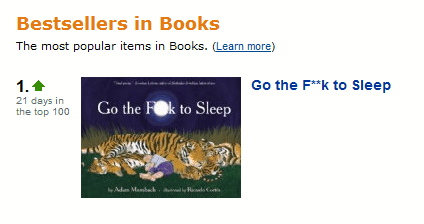 Want more? How about the fact that film rights have already been sold to Fox2000. Or that publishers in the UK, Australia, South Africa, India and even China are also putting the book out simultaneously with the US release?

Some credit the sales to a pirate PDF of the book. The PDF went viral, with the pages spread via twitter and Facebook as well as other ‘new media’. The book began as a Facebook post between friends 11 months ago, so it’s only fitting it goes full circle.

Not everyone’s looking on the positive side, though. Business Insider insists it only works for ‘a picture book, not a novel, so the value of the physical object is higher than for a book which is just text.’ and that people will ‘buy the book, not for themselves, but for a friend. Again, this isn’t applicable for most books.’

Or, put another way, this book is something people not only want to own, but want others to own, and that it’s obscurity, not piracy that’s the real problem. What a surprise it’s sold so well then. Sounds like a novel way of dealing with piracy though – make stuff people want to buy, it might just catch on….

IFPI Advises Kids to Use LimeWire and Kazaa

A PirateBay for Kids