IFPI Advises Kids to Use LimeWire and Kazaa 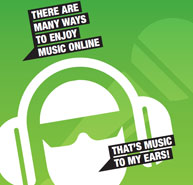 The campaign’s leaflet (pdf) is distributed through schools and colleges, libraries, record stores, teaching portals and websites in 21 countries. It advises kids and parents about the dangers of filesharing, and advises them to use the legal music online stores, which are listed on pro-music.org, with the aim of keeping kids safe online.

IFPI proudly announced their new campaign a few weeks ago, writing: “The campaign comes as millions of people take advantage of the explosion of new ways of accessing music digitally, but still lack clarity on safety and legal issues, on finding legitimate sites, on the basics of copyright and on how to unpick the jargon of digital music.”

IFPI has always been concerned with the safety of children, and on pro-music.org they maintain a list of download stores that are ‘safe’ to use. I was of course curious about these legal stores, and since i’m from the Netherlands, I decided to give the Dutch legal stores a try. This turned out to be an interesting experiment.

To my surprise, the first 4 sites on the list were all gone, some had quit, and others redirected to websites that didn’t sell any music. Even worse, commodore.nl -the first site on the list- served ads for a scam site that sells filesharing software.

I finally got something that looked like a music store when I got to the fifth link, dance-tunes. However, when I searched for the latest Radiohead album, nothing came up. The site only has a few mp3s, and nothing of my choice.

The journey continued, and with sixth site, download.nl, I finally found some good music. Interestingly however, the songs I found were not for sale. Instead, I was advised to download LimeWire, Shareaza and Kazaa Lite. This may indeed sound a little confusing, but the IFPI apparently wants kids to use filesharing software after all.

So, to sum up my legal music experiment. I tried the first 6 sites advised by IFPI, 4 didn’t sell any music, the fifth only listed a few songs, and the sixth website I tried advised me to install LimeWire or Kazaa. It gets even worse further down the list where the kids end up at sites that sell hardcore adult movies.

Viviane Reding, EU Commissioner for Information Society and Media said about the new campaign: “The new guide is a very good example of an initiative that offers simple, practical advice to parents and teachers to keep young people safe and legal while enjoying music on the Internet.

I guess she didn’t try it herself.

Screenshot of a music “store” promoted by IFPI 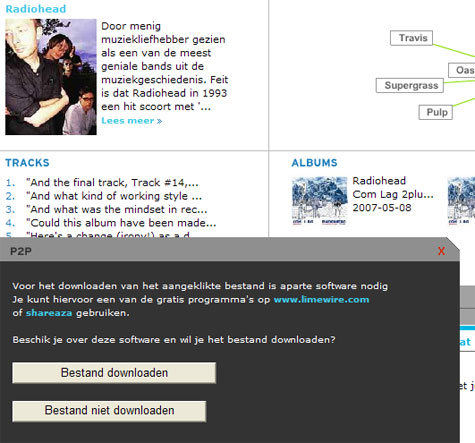