Pirate Site Owner Found Guilty, But He Can Keep The Profits

Traditionally, Sweden has been rather tough on people who operate file-sharing sites, with The Pirate Bay case as the prime example.

In 2009, four people connected to the torrent site were found guilty of assisting copyright infringement. They all received stiff prison sentences and millions of dollars in fines.

The guilty sentence was upheld in an appeal. While the prison terms of Peter Sunde, Fredrik Neij and Carl Lundström were reduced to eight, ten and four months respectively, the fines swelled to $6.5 million.

This week another torrent related filesharing case concluded in Sweden, but with an entirely different outcome. IDG reports that the 47-year-old operator of Filmfix was sentenced to 120 hours of community service.

Filmfix.se offered community-curated links to a wide variety of pirated content hosted by external sources, including torrent sites. The operator charged users 10 Swedish Krona per month to access the service, which is little over a dollar at the current exchange rate.

With thousands of users, Filmfix provided a decent income. The site was active for more than six years and between April 2012 and October 2013 alone it generated over $88,000 in revenue. Interestingly, the court decided that the operator can keep this money. 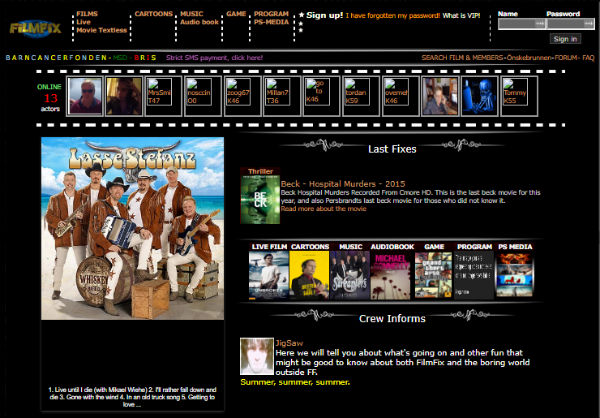 While the District Court convicted the man for facilitating copyright infringement, there was no direct link between the subscription payments and pirated downloads. The paying members also had access to other unrelated features, such as the forums and chat.

Henrik Pontén, head of the local Rights Alliance, which reported the site to the police, stated that copyright holders have not demanded any damages. They may, however, launch a separate civil lawsuit in the future.

The man’s partner, who was suspected of helping out and owned the company where Filmfix’s money went to, was acquitted entirely by the District Court.

The 120-hours of community service stands in stark contrast to the prison sentences and millions of dollars in fines in The Pirate Bay case, despite there being quite a few similarities. Both relied on content uploaded by third parties and didn’t host any infringing files directly.

The lower sentence may in part be due to a fresh Supreme Court ruling in Sweden. In the case against an operator of the now-defunct private torrent tracker Swepirate, the Court recently ruled that prison sentences should not automatically be presumed in file-sharing cases.