While HDS.to may not be known to most English-oriented pirates, it became one of the premier streaming sites in French-speaking countries this year.

It is ranked among the 30 most-visited sites in Belgium, for example, and gathered a significant user base in France, Canada, and Switzerland too.

A few days ago the position began to change. As the weekend began the site went offline, and it didn’t take long before users noticed that something wasn’t quite right.

Instead of a gateway to hundreds of free movies and TV-shows, a rather grim message appeared, stating that the site was closing for good.

“HDS-TO is permanently closed,” it read, translated from French. “Thank you for your understanding and goodbye.”

This notice got the rumor mill going and according to some, the site was still accessible with a VPN. However, a follow-up message posted on HDS.to made it clear that this was not the case.

“Warning! We do not have any accounts on social networks (Twitter, Facebook…). Announcements made by so-called official accounts are misleading,” the message read.

“Be careful also of sites that offer you to subscribe to a VPN to access the site, their goal is simply to earn money through an affiliate program when you subscribe to a VPN. Please understand that the site is permanently closed, there is no (VPN, account…) way to access it.” 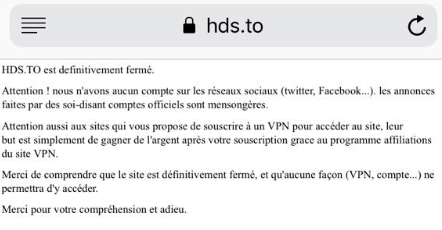 At the time of writing this message has also disappeared. Instead, it’s been replaced with a standard “404 Not Found” error.

The shutdown is especially painful for those who paid to access the site. It appears that HDS.to, in some cases, charged 3.99 euros per month for unlimited access. Although this could be bypassed by switching IP-addresses, there are plenty of people who handed over money.

It remains unclear why the operators of the site decided to close shop. There is currently no indication that it’s the result of legal issues. If more information appears we will update this article accordingly.

While it appears that HDS.to is not coming back, there will not be any shortage of copycat sites trying to take its place. We’ve already observed HDSS.to jumping in, and there are bound to be more initiatives similar to that. 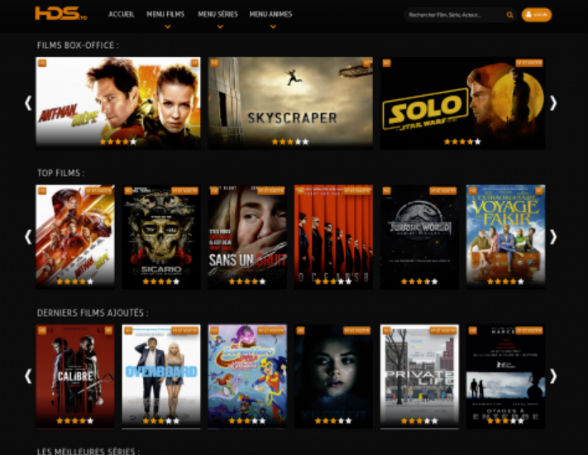