For the past four years Rick Falvinge, the founder of the Swedish and first Pirate Party, has been working on Swarmwise, his second book.

“Swarmwise is a summary of what I learned on building a cost-efficient community that is capable of delivering to world-changing levels,” Rick told TorrentFreak.

“We put people in the European Parliament on less than one percent of the competition’s budget, and we beat them. There is a lot of new stuff here on leadership, swarming, and community-building that I haven’t seen anywhere else.”

Rick says that the techniques he describes in his book work equally well whether they are applied in social, business or political environments.

“The only consistent factor is that the person wanting to change the world needs to be short on cash and time,” he notes. 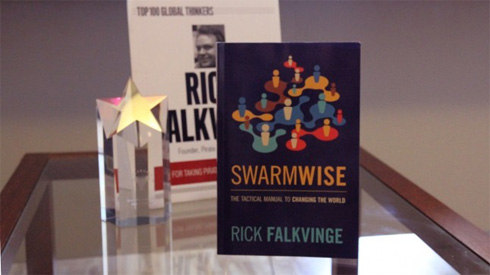 Swarmwise is due for a release soon but this morning (perhaps somewhat fittingly considering Rick’s unswerving support for file-sharing) the book leaked on The Pirate Bay. Well, that seems to have been the intention at least.

The torrent, uploaded by an anonymous account, carried with it a somewhat taunting message.

“From the author that you love to hate, or hate to love. That delivers lulz and facepalms in equal doses,” the release begins. “Just remember, dear Ricky, where ‘your’ ideas come from. They are as unique as any musicians music, or any writers concepts.”

However, despite the leak and the mocking tone, the leaker’s plan fell off the rails. Rick himself had quickly jumped on the torrent and he didn’t like what he was confronted with.

“Oh come ON, what kind of release is this? It’s not even properly packed,” he wrote. “Come on, you don’t need a multi-part ZIP inside a RAR archive when you’re already inside a torrent folder.”

Rick informs TorrentFreak that he had anticipated the possibility of a leak and only had a problem when it was badly presented.

“I was concerned that the people who went for the torrent may get disappointed in the quality of it, and that may reflect badly on the leadership book I’ve been working on for four years,” he explained.

Trying to put things right, Rick took matters into his own hands.

“If you really want this book in pre-release quality, don’t use this torrent, it appears to be broken,” he wrote, adding a link to a PDF on his own site instead for good measure.

“So, much better to make sure that the people who search for Swarmwise and find the torrent actually can get the pre-release version advertised,” Rick told us. “It’s still not proper, with draft image quality and stuff, but at least it’s the advertised pre-release.”

Of course, considering Rick’s anti-copyright stance he’s hardly likely to complain about the leak, but now he’s on the receiving end, how does that feel?

“A leak is an interest in your work. As such, it is a golden business opportunity to connect with your potential customers and/or people you want to get to know, for a myriad of reasons,” Rick explains.

“Of bloody course you want to make yourself known and say hi if there’s a torrent of your book somewhere? How else are you going to build a community? Which, by the way, is what the book is about: building a community and delivering. A bit of meta-levels there.”

Fans of Rick’s work will be able to buy a paper version of the book on Amazon next week but if they can wait and don’t want Rick’s ‘workprint’ style version, a finished electronic version will be out soon, free of charge (and free to share) of course.

“Actually, it’s more than free to share; the copyright monopoly page (which is usually filled with grim FBI warnings etc) says outright that people are _encouraged_ to share it with friends if they like it. I think that’s only proper,” Rick says.

Finally, we asked Rick if there was one single lesson that he’d like a reader to take from his book, what would that be?

“Whether you think you can or cannot change the world, you’re most likely correct,” he concludes.