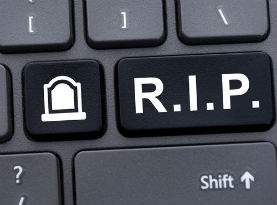 Marilyn Monroe passed away more than 60 years ago but, with more than 1.7 million followers on Instagram, she’s also one of the top social media influencers today.

This is strange but dead celebrity influencers are not uncommon. They are prominently visible on social media, sporting blue checkmarks as if they never passed away.

In some cases, these accounts are controlled by direct family members who work hard to keep the spirit of their loved ones alive. However, others are controlled by corporations that have nothing to do with the person they represent.

This issue was highlighted recently by Andrew Gilden, who works as an Assistant Professor of Law at Willamette University. In an academic article titled “Endorsing After Death,” Gilden gives an overview of the legal aspects and challenges that arise.

The article shows that, in some cases, there’s an uncomfortable side to the digital immortality of dead celebrities, especially when they begin to promote products or get politically involved. For example, over the past year, several ‘dead’ influencers have promoted facemask sales. 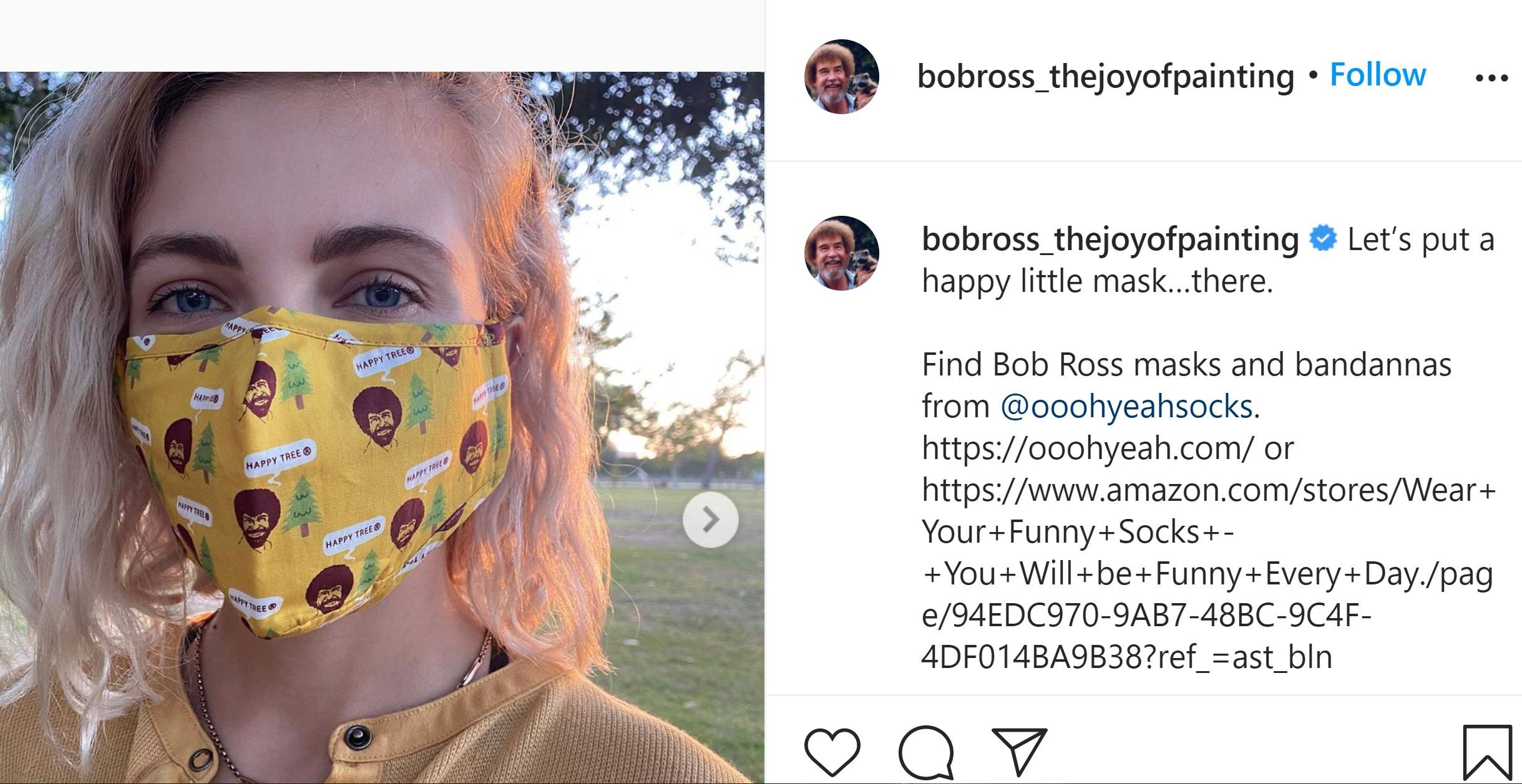 Other deceased celebrities got involved in polarized debates or political campaigns. Marilyn Monroe, Muhammad Ali, Elvis Presley and many others joined the #BlackoutTuesday protests, for example, while Ronald Reagan and Tom Petty supported Trump’s reelection campaign.

We don’t always know the intentions of the people involved, which may be honorable. What we do know, however, is that the people whose names were used had no say in the matter. They’re dead, after all.

It can be awkward to see accounts posting messages in the name of dead people, who perhaps would have never agreed with the thing being supported or promoted. Many of the “estates” that own the rights may strive to do ‘what’s best,’ but for who?

It’s an uneasy topic that, in the legal sense, is controlled by intellectual property law. After someone passes away the rights are typically passed on to direct family or friends, unless agreed otherwise. However, after a few decades have passed, things can look quite different.

Gilden illustrates this by using Marilyn Monroe as an example. Monroe’s “assets” are owned by people organizations that have no ties to her whatsoever.

Marilyn Monroe died in 1962, and her will devised 75% of the residue of her estate (which included her intellectual property rights) to her acting teacher Lee Strasberg, which then passed to Strasberg’s wife upon his death in 1982. The remaining 25% went to Marianna Kris, Monroe’s psychiatrist, who passed her portion to the Anna Freud Center when she died in 1980. Strasberg became the administrator of the Monroe estate from 1989 until 2001, when the estate finally closed. At that point, the estate transferred all its assets to a newly-formed company, Marilyn Monroe LLC, which was owned by Ms. Strasberg and the Freud Center until 2010. In 2010, the Authentic Brands Group purchased a controlling interest (and later the entire interest) in Marilyn Monroe LLC and established a new subsidiary, the Estate of Marilyn Monroe LLC to manage the assets it had acquired”

Monroe LLC is the legal rightsholder and it survived a challenge in court. That said, it is safe to say that the people controlling the social media accounts have no idea what Monroe ‘would have’ thought on certain topics.

Like her immortal online alter ego, she may have indeed been a vocal supporter of Black Lives Matter and a staunch promoter of Walmart perfumes, Zales jewelry and teeth-whitening solutions. But what if she wasn’t?

Most people don’t even consider the possibility that they are looking at a corporate account that monetizes intellectual property. They just like Marilyn Monroe. And probably white teeth too.

Not all commercial promotions are equally appreciated by everyone though. Every now and then there’s a critical note. In his paper Gilden highlights some examples, including a Bob Ross follower, who didn’t like the facemask promotion we showed earlier.

When we browsed through the profiles of several dead celebrities we saw similar critiques. For example, when Elvis promoted a bottle of Elvis branded wine on Instagram.

“For Gods sake! Did he even drink wine? Exploitation at its most disgustingly best! Have respect!” ‘mtemah’ replied. 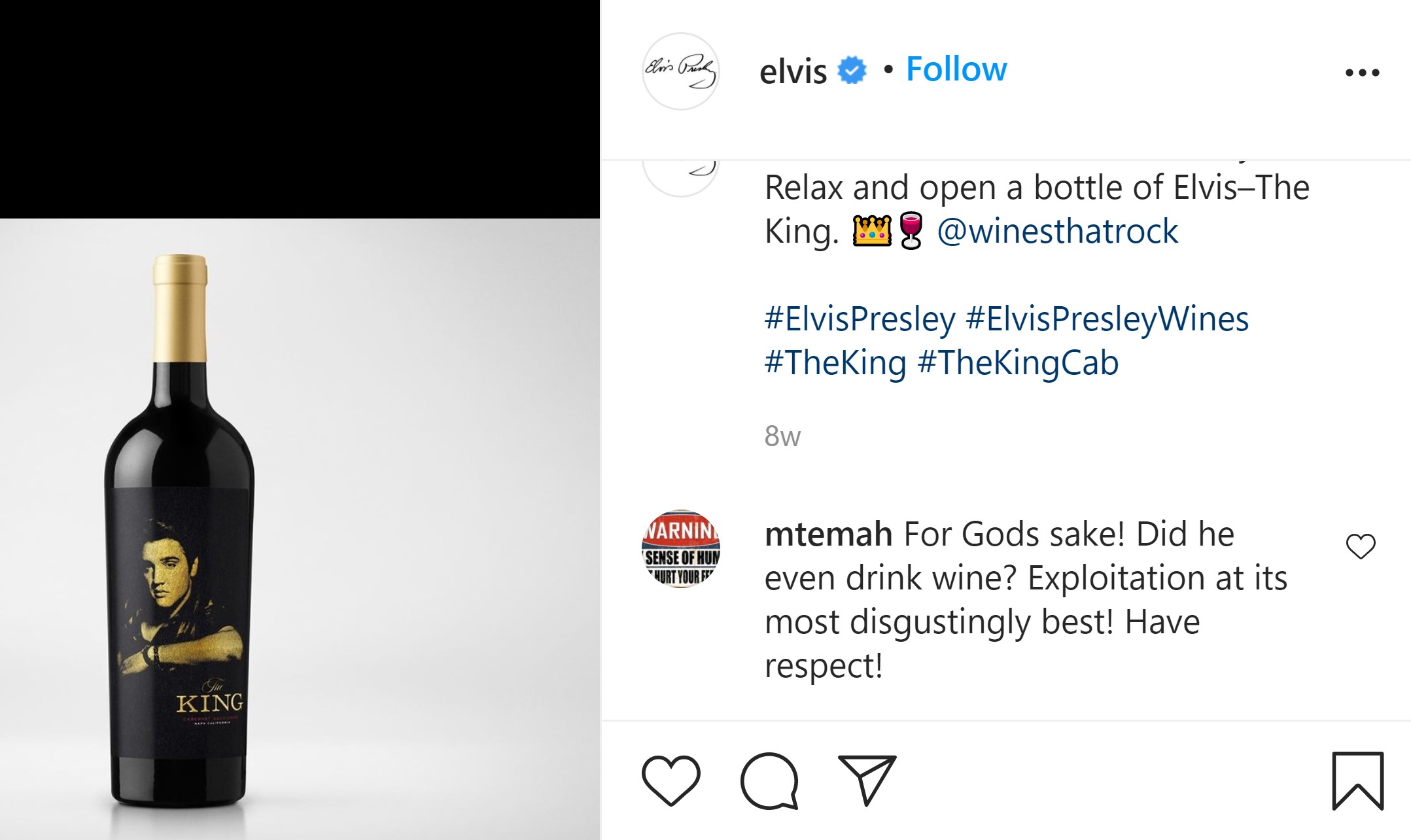 In his article, Gilden concludes that “the dead have never been more alive.” The digital world allows their online presence to continue. But, that means they are entirely dependent on the people who control their estates.

This is something everyone should be aware of but celebrities in particular. Do you really want to promote products or endorse politicians decades after you’re gone? Even if the people who benefit from it are complete strangers?

Right now, the law has little notion of dignity. Or as Gilden puts it:

“The result is a system of posthumous endorsement that pays little heed to the dignity of the deceased or to the desire for surviving fans to maintain emotional and psychological bonds with them.

“Only if posthumous endorsements were made more transparent, were the result of deliberate decision-making, and were entrusted to individuals closely connected to the decedent, could they constitute part of a thriving digital afterlife.”

In any case, I’ll never look at these accounts again without wondering who’s running them and why.

Are Cops Playing Music While Being Filmed to Trigger Copyright Filters?