Since then the case hasn’t progressed much. Kim Dotcom’s extradition hearing has been delayed until 2015 and most of the recent court proceedings dealt with how the seized assets should be handled.

Dotcom tried to regain his possessions but this effort failed last month. Meanwhile, both the MPAA and RIAA have protected their claims on the Megaupload millions, and now the U.S. Government has joined in as well.

In a complaint submitted at a federal court in Virginia the Department of Justice asks for a forfeiture of the bank accounts, cars and other seized possessions, claiming they were obtained through copyright and money laundering crimes.

The filing starts with a brief summary of the indictment that was brought against Dotcom and his colleagues. According to the Government, Megaupload was a criminal organization set up to profit from copyright infringement.

“The members of the Mega Conspiracy described themselves as ‘modern day pirates’ and virtually every aspect of the Mega Sites was carefully designed to encourage and facilitate wide-scale copyright infringement,” the U.S. attorney writes.

The Government wants the seized properties to be handed over to the authorities, and claims it’s permitted under U.S. law. This includes the bank account that was used by Megaupload for PayPal payouts.

The account, described as “DSB 0320,” had a balance of roughly $4.7 million (36 million Hong Kong Dollars) at the time of the seizure, but processed more than $160 million over the years.

“Records indicate that from August 2007 through January 2012 there were 1,403 deposits into the DBS 0320 account totaling HKD 1,260,508,432.01 from a PayPal account. These funds represent proceeds of crime and property involved in money laundering as more fully set out herein,” the complaint reads.

One of Megaupload’s bank accounts 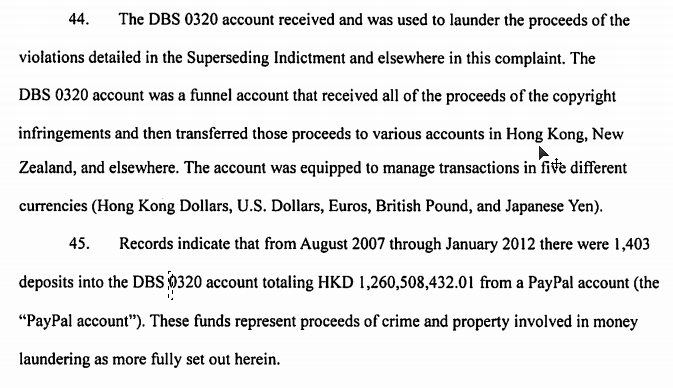 More than a dozen bank accounts are listed in total including some of the property they were used for to buy.

The list of assets further includes several luxury cars, such as a 2011 Mercedes-Benz G55 AMG with a “Wow” license plate, TVs including a 108″ Sharp LCD TV and artwork in the form of Olaf Mueller photographs.

The Government claims that the possessions can be forfeited since they were obtained through criminal copyright infringement and money laundering, but Megaupload’s lawyer Ira Rothken disagrees.

“The DOJ’s efforts to use lopsided procedures over substance to destroy a cloud storage company is both offensive to the rights of Megaupload and to the rights of millions of consumers worldwide who stored personal data with the service,” he adds.

According to Rothken the U.S. ignores several crucial issues, including the Sony Doctrine and the fact that criminal secondary copyright infringement no longer exists.

“The DOJ’s forfeiture complaint ignores the US Supreme Court’s protection called the Sony Doctrine provided to dual use technologies like cloud storage, ignores substantial non infringing uses of such cloud storage including by DOJ users themselves, and ignores the fact that Congress removed criminal secondary copyright infringement from the copyright statute in 1976,” Rothken says.

Which side the District Court judge will agree with has yet to be seen, but with so many parties claiming their cut of the Megaupload assets it’s certainly not getting easier for Dotcom to reclaim his property.