German Internet subscribers can be held liable for almost everything that goes on via their connections, with or without their knowledge.

As a result, copyright holders have started hundreds of thousands of lawsuits against alleged pirates, demanding settlements ranging from a few hundred to thousands of euros.

In Germany these “trolling” ventures have attracted the attention of the major Hollywood studios. 20th Century Fox, Universal Pictures and Warner Bros Entertainment are actively patrolling the Internet for people who download their work without permission.

The studios use similar monitoring tools as they do in the United States, where file-sharers are approached outside of court with a slap on the wrist or a $20 fine. In Germany, however, the stakes are much higher.

For example, 20th Century Fox is sending alleged file-sharers a 726 euro ($980) bill for downloading a single episode of the TV-series Homeland. For several months the Hollywood studio has been tracking unauthorized downloads of Homeland’s second season, which has yet to air in Germany. 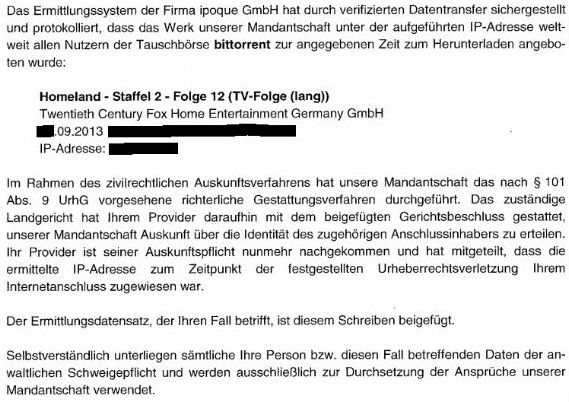 While these downloads are unmistakably unauthorized, it is ironic that these lawsuits target the TV-show’s most engaged fans. In Germany, Homeland’s second season starts airing on TV next week, a full year after the U.S. premiere.

Still, the Hollywood studios regularly single out these “delayed” TV releases for their legal efforts. According to Christian Solmecke, a German IT lawyer who has defended hundreds of file-sharers, these shows are regularly targeted.

“The sharing of English-speaking TV series is particularly popular in Germany as these releases are often delayed. As a result, warning letters are regularly received for such copyright infringements,” Solmecke told TorrentFreak.

Unlike in the United States, Internet subscribers have no option to protest a copyright holders’ request to hand over their personal details. Paired with the fact that German ISPs can only store IP-address information for a week, this leads to a situation where personal details of accused subscribers are handed over pretty much automatically.

For the letter TorrentFreak received, the court signed off on handing over the subscriber data within a day of the IP-address being tracked. This is a worrying development according to legal experts and privacy advocates. The low retention periods for IP-addresses are meant to protect the privacy of users, but the opposite may be true in this case.

“I find it shocking when an IP-address is processed by the court on the same day as the infringement takes place,” Solmecke tells TorrentFreak.

“After all, judges should examine each claim on a case-by-case basis. In practice, however, the process is completely automatic and despite this obligation, it is unlikely that the judges properly scrutinize each individual case.”

The Hollywood movie studios, and dozens of copyright holders with them, are more pleased with how the system works. They are literally cashing in on these BitTorrent pirates to the tune of millions of euros every year.

Previously we pointed out that many major music labels and game publishers including CD Projekt have also been involved in the German settlement scheme. After public outcry, mainly targeted at the questionable reliability of the evidence, the latter retired its legal crusade against pirates.

“We value our fans, our supporters, and our community too highly to take the chance that we might ever falsely accuse even one individual,” CD Projekt’s Marcin Iwinski said at the time.

Whether 20th Century Fox and others respect their ‘fans’ just as much is doubtful.

Update: clarified that Homeland season 2 has been available on iTunes.