The Alliance for Creativity and Entertainment (ACE) is a coalition of 30 companies that reads like a who’s who of the global entertainment market.

All of the major Hollywood studios are members, plus Amazon, Netflix, BBC, Hulu, and Village Roadshow, to name a few.

ACE was launched last year to present a united front against online infringement and since then has been involved in various anti-piracy actions.

ACE has made the third-party Kodi addon scene one of its early priorities, targeting developers with home visits and lengthy letters demanding that they cease and desist their activities. This has led to several pulling back from the scene but in some instances, this doesn’t appear to have been enough for ACE.

The letters received by the developers also include a requirement for them to sign a settlement agreement which binds them to a particular course of future behavior set out by ACE. It’s unclear how many developers have signed but TorrentFreak is aware that several have not.

One of those is JSergio123 who last November announced he would be discontinuing development of several Kodi addons after being targeted by ACE.

“Sorry to say but I am stopping all development of the urlresolver, metahandler, and my other addons,” he said.

JSergio123’s reluctance to sign an agreement with ACE hasn’t gone unnoticed by the anti-piracy group. In a letter dated March 5, 2018 and signed by Kelly Klaus of US-based lawfirm Munger, Tolles & Olson, the developer is reminded of what transpired last year and what is expected of him moving forward.

“I understand that ACE counsel have discussed with you various of your “Addon” software applications and related software and services, including URLResolver (collectively, the “[redacted] Addons”) and other actions you have undertaken to induce and contribute to the mass infringement of the ACE members’ copyrighted works,” Klaus writes.

JSergio123’s precise reasons for not signing the settlement agreement aren’t being made public. However, TorrentFreak understands that some of the terms presented to addon developers last year have caused considerable concern. In some cases they are difficult to meet, not to mention unpalatable to the people involved.

They include promises to ensure that specified addons and indeed any developed in the future can no longer infringe copyright. For those that scrape third-party sources, this could prove impossible to absolutely guarantee. This could effectively put developers out of the addon game – legitimate or otherwise – for good.

TF is also informed that ACE demanded a high-level of cooperation, including that the developers should supply what amounts to a full confession, detailing all the projects they’ve been involved in, past and present.

Furthermore, the ACE agreement reportedly requires developers to inform on their colleagues by providing personal information such as identities and contact details. There’s also a requirement to indicate whether and how developers been making money from their activities.

The new letter from ACE, which is shown below after being published by JSergio, refers to a “most recent draft of the settlement agreement that ACE members would be willing to sign.”

Whether this contains any amendments from the settlement agreements sent out last year isn’t clear but Mr Klaus, who is a veteran of several large infringement lawsuits in the US, says that JSergio should take the offer seriously.

“I strongly urge you to consider the gravity of this situation and sign the agreement,” the lawyer concludes. 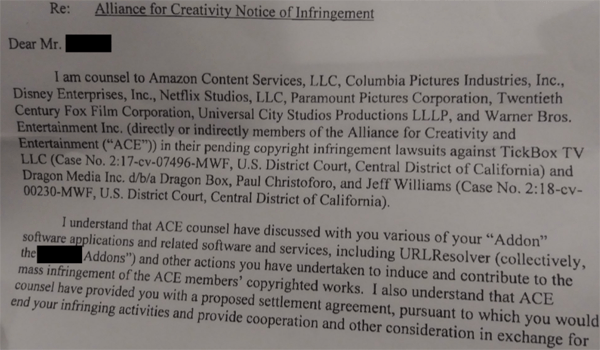 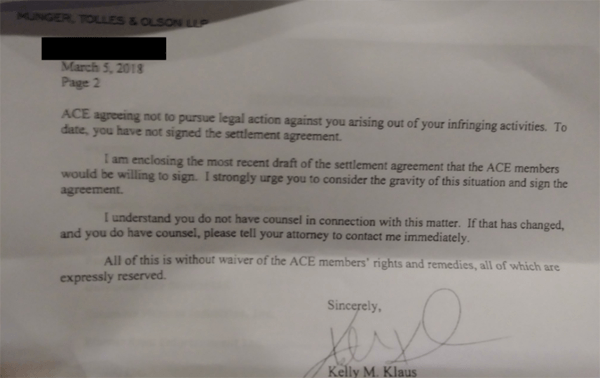