Educating the most easily influenced members of society is what our world is built upon, so it comes as little surprise that when planning for the future, guiding the youth in a particular direction is a useful strategy.

Over the last few years, in an attempt to force reductions in illicit file-sharing, movie and music groups have targeted young adults and children with a broad spectrum of anti-piracy campaigns.

At the brutal end of the scale is the climate of fear generated by targeting the teenage inhabitants of colleges and universities in the United States with lawsuits and the more recent threat of reduced funding.

Somewhere in the middle lie schemes such as the one behind “Escape From Terror Byte City”, the MPAA-created book which tells the story of two young boys who attempt to download the latest Transformers movie from a file-sharing website but, naturally, everything goes terribly wrong for them.

Others have targeted even younger children, and sometimes in not entirely straightforward manner either, such as when EMI went undercover in 2009 to promote music in schools but were revealed to have an anti-piracy agenda.

This week sees the launch of a new anti-piracy campaign, this time created by digital distribution company IRIS Distribution and the American Association of Independent Music (A2IM).

The “I Share Everything But My Music” promotion features artwork by illustrator and animator S Britt, as seen below.

“Copyright awareness doesn’t have to be heavy-handed; it boils down to supporting the artists that create the music we love,” said Bryn Boughton, Co-Founder and CMO of IRIS Distribution.

“IRIS Distribution has over 700 independent label clients, so we are intensely concerned with helping them sustain their artists’ recording careers. S. Britt helped us create something fun that people will want to buy for the kids in their lives, and at the same time, promotes music ownership.”

The artwork is indeed eye-catching and very kid-friendly, but obviously the animals were chosen to provoke a response in children, a point not lost on Hypebot.

“The campaign is a cutesy way to start the conversation about music piracy with kids,” they wrote today. “But does the rabbit seem a little conceited? Does the raccoon resemble a thief? And if that orange is an MP3, the rabbit appears too stuck-up to take it.”

The kid’s t-shirts are available from ShareShirts, either on their own or bundled with a couple of children’s albums – Kimya Dawson’s Alphabutt and Kids Songs: Sing and Learn Activities. But while even the RIAA tends to stop at 4 year-olds, IRIS go even further – with anti-piracy clothes for babies. 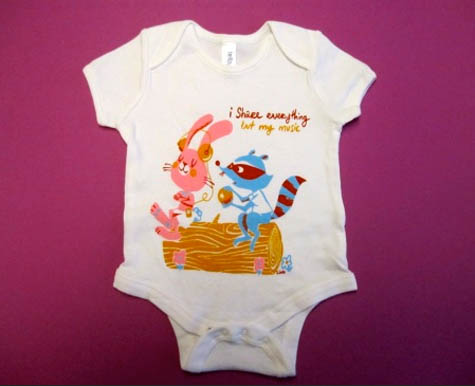 While this fairly gentle campaign from IRIS can hardly be compared with those generated by the RIAA, one has to wonder if it will enjoy any more success than any of the other initiatives in recent years, especially when they are continually set back by things such as thoughtless music rights issues that negatively affect children.

Maybe you think you could do better? Perhaps you’d like to see an alternative message displayed on your own version of ShareShirts? There’s a full size image available here – feel free to put your remixes or fresh designs in the comments.