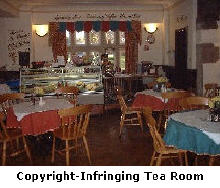 Be under no illusion, being unlicensed to play music to the public is a very serious situation in the UK. The Copyright, Designs and Patents Act 1988 states that if you use copyright music in public, you have to get permission from every single copyright holder to play their music. Or pay a fee to the right outfit.

Car maintenance chain Kwik Fit is currently tied up in a bitter legal battle with the UK Performing Rights Society (PRS). It’s alleged that Kwik Fit’s mechanics allowed their radios to be played within earshot of the public – a truly heinous crime for which the PRS are demanding Â£200,000 in damages.

According to a report, the PRS are at it again. The staff at a charity also received a visit from a PRS officer who declared that because a staff radio in the kitchen could be overheard by the public in their tea-room, they would need a license. The charity, Dam House, which was originally set up to save a historic building and offer community and health facilities, had to have a fund-raising event to raise the money for the license.

However, having purchased a license, this wasn’t the end of the matter. The PRS then started asking more questions, and when they discovered that kids sing in a carol concert there at Christmas, they declared that the premises were under licensed. Yes, of course – the PRS wanted yet more money.

“We got really worked up when they told us how much we would have to pay this year” said charity trustee, Margaret Hatton. “They asked us what facilities we had and we think they are charging more because they found out we’ve got a function room.”

The next quote from Margaret really speaks for itself – has the world gone mad?

“They told us the only way to avoid paying to sing the carols is if the kids are told to stick to old songs which are out of copyright.”

Next thing you know someone will be saying ‘Happy Birthday‘ is copyrighted and you can’t sing that to the public in the tea-rooms. Well, unfortunately it is, and legally you can’t.

Elaine Hurst, another Dam House trustee explained: “We know the recording artists need to be paid for their work but this is ridiculous.”

Every TV owning family in the UK has to have a UK TV License by law, the proceeds of which go to fund BBC TV and BBC radio stations nationwide. To charge a charity money because the public can overhear a radio is crazy, especially when you consider the public already paid another license to be allowed to listen to the content coming out of its speakers.