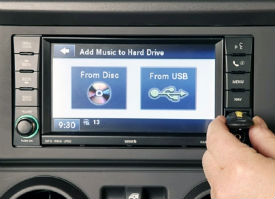 Toward the end of the last century record labels feared that home taping would kill the music industry.

To counter the threat cassette tape recorders posed at the time, they asked Congress to take action.

This eventually resulted in the Audio Home Recording Act (AHRA) of 1992. Under this law importers and manufacturers must pay royalties on “digital audio recording devices,” among other things.

The legislation is still in play today. Instead of targeting cassette recorders, however, the threats are now other copying devices. According to the Alliance of Artists and Recording Companies, this includes media entertainment systems that are built into many cars.

This week the music group, which lists major record labels and 300,000 artists among its members, sued Chrysler and its technology partner Mitsubishi (pdf) for failing to pay royalties.

The dispute revolves around Chrysler’s media entertainment systems including “MyGIG” and “Uconnect Media Center” which allow car owners to rip CDs to a hard drive.

“These devices are covered by the AHRA, but the defendants have refused to pay royalties on them or include the required serial copy protections,” AARC Executive Director Linda Bocchi comments.

The music group reached out to Chrysler and Mitsubishi hoping to settle the issue, but these talks failed. As a result AARC saw no other option than to take the case to court.

“We had hoped Chrysler and the Mitsubishi Electric companies would settle their liability and begin paying what they owe once they had an opportunity to study and assess the issues,” Bocchi says.

“But it has now become painfully clear they have no intention of complying with the law. While litigation is always a last resort, it is clear this lawsuit is the only way to protect our members’ rights.”

The current lawsuit follows an earlier case against Ford and General Motors, which is still ongoing.

In both cases artists and record labels are looking for statutory damages, which could amount to hundreds of millions of dollars. In addition, they want to prevent the manufacturers from selling these unauthorized devices in their cars.

Ford has already filed a motion to dismiss arguing that AHRA doesn’t apply to their systems, and the other defendants including Chrysler are likely to do the same. Whose side the court will agree with is expected to become clear in the months to come.