Sandvine, the company that’s best known for manufacturing the hardware that slowed down BitTorrent users on Comcast, has released their latest Internet traffic report. The company has measured the traffic consumption of Internet users in March of 2011 which allows us to highlight several emerging trends in the P2P landscape.

The overall conclusion we can draw from the data is that in Europe and North America BitTorrent traffic continues to grow spectacularly, something that may in part be attributed to the shutdown of LimeWire. The Gnutella network (used by LimeWire) on the other hand has all but disappeared.

The bandwidth usage patterns during peak hours in North America reveal that a massive 52% of all upstream traffic can be attributed to BitTorrent at these times. This is up from 34% in 2010, and since it’s a relative comparison, the absolute traffic consumed by BitTorrent has risen even more.

Traffic generated by the Gnutella protocol (used by Frostwire etc.) in North America has nearly vanished after the LimeWire shutdown. Last year it was responsible for 11% of upstream traffic and 2% of downstream traffic during peak hours. In 2011 it is no longer among the top 10 downstream applications, while the upstream traffic is stuck at little over 2%. 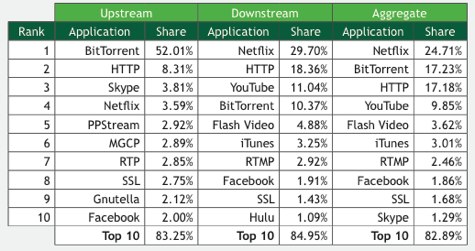 In common with North America, BitTorrent also remains the most used file-sharing protocol in Europe. In fact, the surge in peak hour traffic compared to 2010 is even more pronounced here.

Similarly, downstream traffic during peak hours went up as well, rising from 8% last year to over 21% in March. With upstream and downstream traffic combined, BitTorrent tops the list of most used ‘applications’ leaving HTTP (including cyberlockers) in second place with 18%.

Whether there’s a direct link between the LimeWire shutdown and the increase in BitTorrent usage has yet to be seen. This may explain the fall of Gnutella coinciding with the rise of BitTorrent in the North America. However, in Europe Gnutella was already virtually nonexistent last year, and here BitTorrent traffic has risen even more sharply.

While keeping in mind that Sandvine might benefit from overestimating the percentage of P2P traffic because they sell traffic shaping applications, the above data shows that BitTorrent is still going strong in North America and Europe. The relative share of BitTorrent traffic increased on both regions, and since the overall Internet traffic has grown as well, the absolute increase is even greater.