During the past few years, streaming portals such as Movie2K/4K, Primewire, and other similar sites have gathered huge momentum. Offering movies directly in the browser after just a couple of clicks has opened these sites to even the least tech-savvy Internet user.

With bandwidth costs reducing and apparently good money to be made from streaming video, dozens of streaming sites have appeared hoping to take a piece of the pie. In some cases this has led to confusion, with the appearance of sites deliberately designed to look like those operated by competitors in order to steal traffic.

Those tired of such antics need to brace themselves, because thanks to a new service things are about to get a whole lot worse. Or better, depending on perspective.

TVStreamCMS is a system designed to take the sting out of setting up a video streaming site like Movie4K or Primewire. When we say take out the sting, what we really mean is make it ridiculously simple.

This content management system claims to condense months and years of hard work into a setup taking just a few minutes. Buyers get all the code they need to launch their own site, and movies and TV shows are added automatically by the suppliers.

The operators of TVStreamCMS told TF that their motivations for creating the tool were simple.

“The reason why we made this is not just to make it possible for everyone to have their own streaming site, but also to make it easy for all TV Shows and Movie webmasters, who have for some time waited and only dreamed of making an automated website,” they explained.

“Webmasters no longer have to manually update the episodes daily nor update the movies as they come out in theaters because TVStreamCMS has it done automatically with the use of just their server.”

Looking around the TVStreamCMS site the system seems fairly self explanatory. In exchange for a minimum payment of around $200, users can walk away with a script that creates a site just like XYZFLIX, a demo site that shows what the system can do.

But is it really that simple? To find out, TorrentFreak spoke to ‘M’, the operator of a streaming portal built with TVStreamCMS.

“It took me about 5-10 minutes to set up and then the best thing about the script is that it is all automatic so movies and episodes are added to the site automatically,” M explains.

In addition to the basic package there are also some bolt-ons available. ‘M’ bought the ‘Primewire’ package for $400, which enables the user to make a site that looks and operates just like Primewire, such as the example shown here. TVStreamCMS claims it will add “50,000 movies from sources added to your site daily” and grab content from iwatchonline, SeriesGate, Project Free TV, Vodly and Primewire.

So are many people taking advantage of the offer? At the moment there appears to be quite a few sites being indexed by Google and as illustrated by the image below, completely unsurprisingly they look very similar indeed. 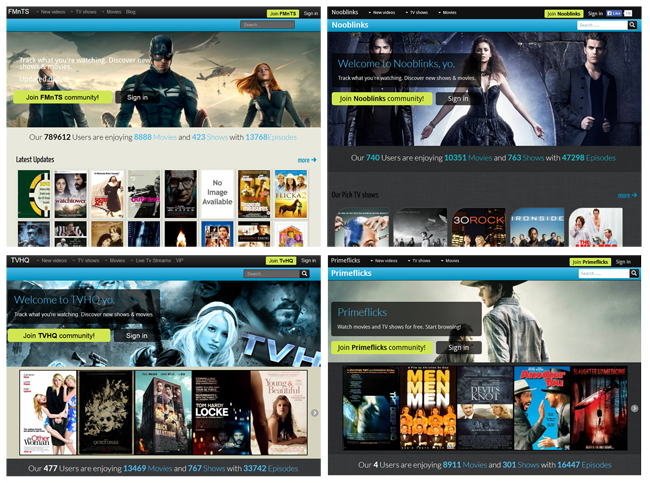 With the people behind the site selling packages to clone not only Primewire but also Sidereel, the potential for confusion among users is pretty high, and no doubt some buyers will attempt to maximize on that by operating domain names similar to already popular sites.

If this cookie-cutter approach to site building really takes off theres the potential for dozens or even hundreds of similar looking streaming sites to appear. However, since each site will be relying on the same central sources for their support and content, they will all be vulnerable to the fortunes of others.

It therefore seems reasonable to presume that one day buyers could wake up and find that nothing works anymore, but for $200 they might be prepared to take the risk. After all, it won’t take long to recoup with the dozens of popups and fake download buttons many streaming sites seem to enjoy.

Update: Emails received by TorrentFreak have reported many issues with TVStreamCMS including:

– The site was ripped from another project (TVSS)
– The scripts don’t work correctly
– That money paid for broken content was not refunded
– Work carried out by others was never paid
– The site template was taken from Trakt.tv