For the past decade, Internet users on the lookout for video have turned to the many torrent sites out there. In a bandwidth-limited online world, they have served their purpose well.

However, in recent years bandwidth has become more easily available at the right price and as a result streaming sites of all kinds have flourished. One only has to look at YouTube for the Internet’s best example.

But in the backwaters of the Internet less official sites have been flourishing. Streaming portals offering all of the latest movies and TV shows have grown from a niche experience into one enjoyed by millions of people everyday.

One of the biggest sites around is 1Channel.ch. The site is used by millions of people every week – probably every day – but most of its users have no idea of the site’s recent history. If they did, they may not feel so comfortable visiting the domain.

Early May, 1Channel.ch (which at the time was also known under its former name of LetMeWatchThis.ch) disappeared from the Internet without warning.

“We are having some issues with the 1channel.ch domain, please use letmewatchthis.ch domain in the mean time,” the site announced.

Behind the scenes all was not well.

“The [1Channel.ch] domain was hijacked from our registrar with a combination of falsified documents and a major security exploit in the registrar’s control panel, that allowed attackers to access any account in their system without a password,” the admin of the site told TorrentFreak.

From this point, 1Channel.ch – which is still running today – became a cloned site using a hijacked domain. Browsing through the site’s forums it’s clear that sections of the site are missing or have been removed while other errors persist. Obviously things are still not working properly for the domain’s new ‘owners’.

With no chance of getting the domain back, the real site was forced to revert to LetMeWatchThis.ch exclusively. As can be seen from the Alexa stats below, the hijackers are doing very well indeed. 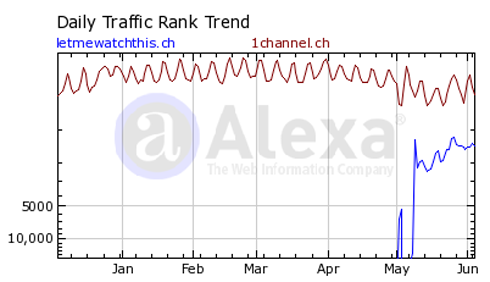 On the other hand, the real site – LetMeWatchThis – has taken quite a hit. The site’s global rank with Alexa is now 5,527 while the fake is enjoying its status as the world’s 347th most popular site.

The woes don’t stop there. Anyone attempting to do a Google search for LetMeWatchThis draws a complete blank. Not only is the site completely absent from at least the first 10 pages of results, an even worse problem soon becomes apparent.

The first result for the domain is a link to 1Channel.ch, the hijacked site. What follows are results for perhaps a dozen or so other sites trying to pass themselves off as LetMeWatchThis with varying degrees of success. Some are very convincing indeed and most would easily fool a casual user.

So, faced with hijackers, clones, fakes and damn, damn pirates, LetMeWatchThis has decided to make a clean break to end all the confusion with a complete renaming of the site to PrimeWire.ag.

“We have switched to the new domain name to differentiate ourselves from all the clone sites out there,” the admin told TorrentFreak. “We would like to ask our fans not to use 1channel.ch as it is potentially spreading malware and collecting users personal log in information.”

Whether 1Channel is doing either of those things is a matter for debate, but it seems clear that so far its users either don’t know or don’t care about the hijacking situation. The site is doing very well and appears to have momentum that won’t be held back anytime soon. After all, going to the police for help is hardly an option.