A week after a DDoS attack hit the popular BitTorrent site Demonoid, it is still down.

Based on what the sole tech admin of the site told us, it looks like it may take weeks before it will return.

“It started as a DDoS but then it caused a series of problems. These problems need to be fixed before the site can go back up, and it’s a complicated fix this time,” the Demonoid admin told TorrentFreak last week.

Initially the site displayed a “server busy” status message but yesterday the server was turned off completely.

Because of the downtime many people have been looking for news on the situation, with an interesting side effect.

The Facebook page DemonoidP2P, which amassed 100 likes in a year, skyrocketed to more than 4000 likes in a few days. All signs point at a troll page, but somehow ZDNet thinks otherwise.

In an article posted today the Facebook updates (including quotes that were pulled from our article) are passed on as news without any verification whatsoever.

The Facebook “admin” seems to be enjoying himself and suggests that a comeback is near. Unfortunately, this might be a tad bit optimistic.

For now, Demonoid users have no other option than to flock to one of the many alternatives.

Update: ZDNet posted an update on the Facebook issue.

DemonoidP2P when it was still quiet 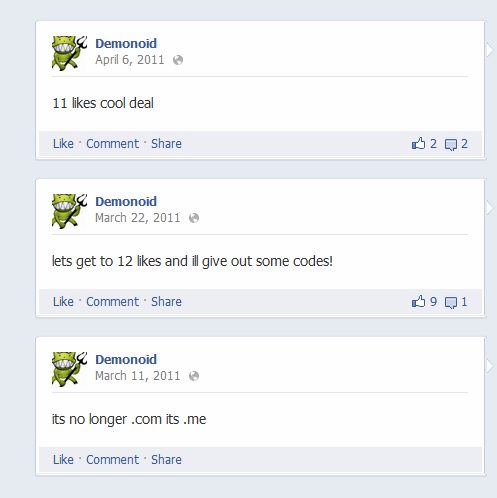