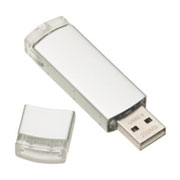 Just as a reminder, Digital Rights Management was introduced to prevent people from using digital content in ways that its producer didn’t approve of. In many instances this means preventing unauthorized copying of MP3s or software.

In reality however, DRM simply amounts to an annoyance for legitimate customers, while those people who weren’t planning to buy but pirate, have plenty of ways to hack or crack the copy protection schemes. Luckily more content providers have started to realize this. But not all of them.

Meet Austin Meyer, the brain behind X-Plane flight simulator and CEO of the software company that develops the game. Meyer is someone who values input from the people who buy his products, and after he received several complaints about the DVD that had to be in the drive in order to play X-Plane, he came up with a brilliant solution.

For a measly $29 the company decided to sell optional USB-drives with a copy of the DVD that can be used instead of the DVD itself. “The keys are only $29, so I am making this affordable,” Meyer commented in a press-release.

We can of course dispute the cheapness of a $29 DRM-tool, but what’s even more interesting is how Meyer responded to some of the questions reporter Dave Duck posed when he tried to find out more about the companies motivations in charging its customers for DRM on a USB drive.

“The usb key is designed to STOP that annoyance by freeing up the drive, WITHOUT requiring anyone to lie, cheat, or steal,” Meyer wrote in one of his replies.

But he structurally ignored the biggest question asked by the reporter. “Given the wide availability of X-Plane torrents, doesn’t this sort of scheme just piss off loyal customers AND fail to stop pirates?”

Indeed, like any other program X-Plane has been pirated and the software is widely available on BitTorrent sites without any DRM. The new DRM on a drive does nothing to change this situation, and is just an extra charge for DRM that only affects legitimate customers.

Like many other software manufacturers Meyer fails to see the problem, and frankly he doesn’t even seem to care whether the DRM works or not. When the reporter asked him about the effectiveness of X-Plane’s copy protection he got the following reply:

As a true gentleman the CEO refused to elaborate any further on how he turned a failed DRM scheme into something that will cost legitimate customers even more money. “I’m just filtering your email now you aren’t worth talking to,” Meyers wrote in his last reply.

We wonder whether if he treats all of his customers similarly?