In case readers missed it, copyright holders are very unhappy with YouTube. In recent months the site has developed into a battleground over the DMCA and the entertainment industries’ war with Google, with the record labels making most of the noise.

This week it was the MPAA’s turn to put more pressure on the site, this time by linking to an article published by filmmaker and anti-piracy advocate Ellen Seidler. As can be seen below, it implores YouTube to clean up its act.

"Time for YouTube to get serious about cleaning up all the junk, spam and malware files on its site" https://t.co/DsTwh3GYv7 @voxindie

The piece by Seidler is an interesting one, in that it criticizes YouTube for allowing people to upload fake movies that lead people to scammy sites.

In the unlikely event readers haven’t seen them, these fake movies are easily found by typing the name of almost any mainstream film into YouTube’s search box and adding the words “full movie”.

Once accessed, the videos nearly always instruct users to ‘click the link’ below the video to access the full movie. These links rarely, if ever, lead to anything good, and especially not the movie people expect. 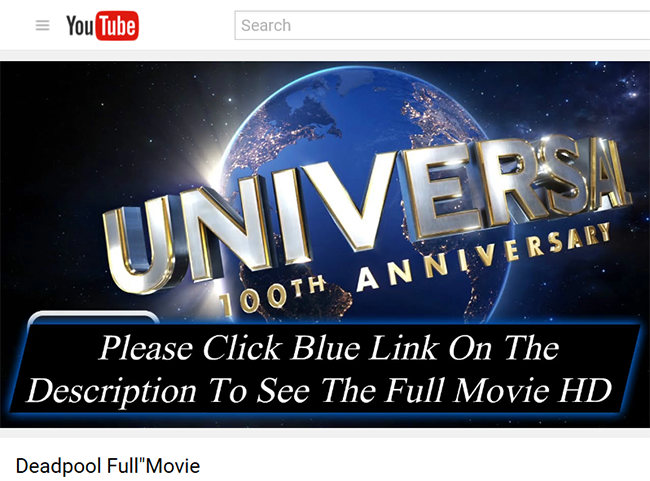 While Seidler’s post expresses concern over the dubious sites that YouTube users are sent to, it seems likely that her post is more broadly aimed at chipping away at YouTube’s credibility and reputation. Little doubt that the MPAA’s retweet had that in mind too.

However, taking a step back reveals a much more complex picture.

Seidler correctly notes that these fakes pollute YouTube’s results but she also reports a secondary problem – it makes her anti-piracy work much harder.

“When I search for copies of my film using my Content ID account, I have to wade through dozens of these fake uploads,” Seidler complains.

“Removing them is an incredibly time-consuming task as it seems YouTube has purposely chosen to make the Content ID dashboard as inconvenient as possible for users.” 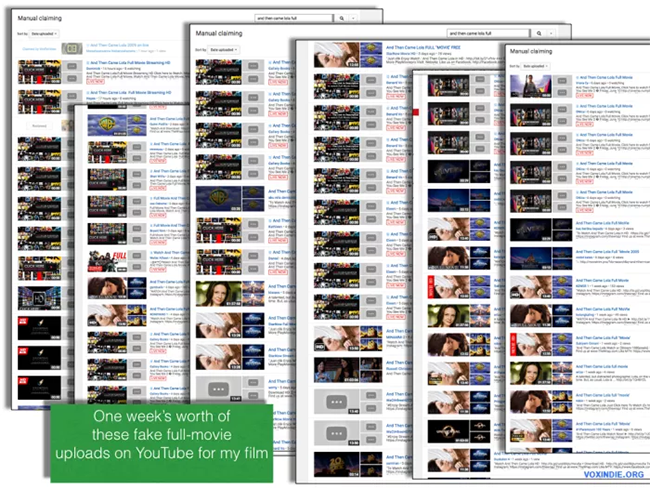 Of course, this situation is bad for people like Seidler who are trying to protect their content but consider for a moment the tremendous negative effect on pirates.

For many years people were able to type a movie title into YouTube, filter out all clips less than 20 minutes long, and more often than not come up with a decent copy of the movie in question.

Today, YouTube’s search results are a horrible place to attempt ‘full movie’ piracy and that’s mostly down to the ‘full movie’ scammers.

If anything, one might think that Hollywood would be at least marginally grateful for third-parties infecting would-be pirates with malware or getting them stuck in horrible subscription traps. That’s quality piracy deterrence right there.

Instead, Seidler suggests ways that YouTube could clean up its site, perhaps by detecting and removing these fakes with ContentID. Pirates would certainly appreciate that, but YouTube isn’t likely to oblige.

Proactively removing content in that manner would only invite calls for YouTube do the same for copyrighted content. Before long, the same calls would go out to Google in general, with big implications for its search business.

So for now, both Seidler and would-be pirates are going to have to put up with these fake movie operations. Anti-piracy people will have to figure it out for themselves, but the best advice for regular users is to never click on the links in ‘fake movie’ YouTube descriptions.

Finally, Seidler raises the question of who is behind these scams. One of the outfits she names is TzarMedia.com, a site that has hundreds of negative online reviews.

The rabbit hole seems very, very deep on this one but there seems to be a recurring theme for those with an urge to investigate further. It looks messy, really messy.