Blocking websites is in vogue for copyright holders all around Europe. They normally need to go to court to have allegedly-infringing sites blocked at the ISP level but in Portugal no such formality is required.

In recent months local Internet providers have already blocked hundreds of websites for allegedly linking to copyright infringing content. The action is the result of a voluntary arrangement between the Ministry of Culture, the Association of Telecommunication Operators, and copyright holders including anti-piracy group MAPiNET.

The lack of judicial oversight has been a concern for activists ever since the introduction of the agreement. Now it appears their fears were not unfounded.

Ultimate Music is a site operated by journalist and blogger Josep Vinaixa. He reports on entertainment industry news, such as track and album releases, and also embeds YouTube videos. In the image below one can see a typical piece which announces the launch of an album by Sigma and embeds an official Sigma video from YouTube. 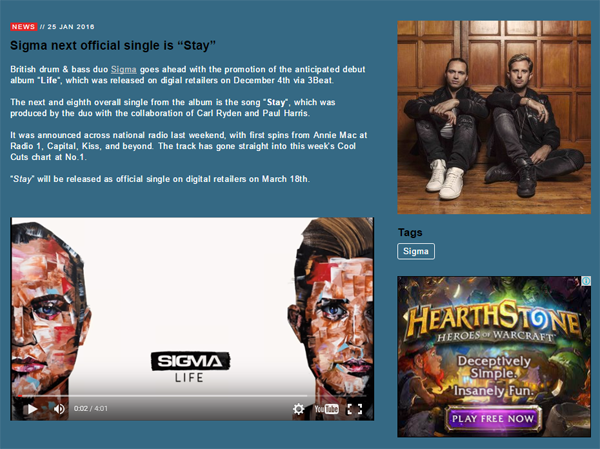 Vinaixa works with international record labels who send him information about releases and even request that he embeds their videos in his site. However, local anti-piracy group MAPiNET believes that embedding YouTube videos is illegal unless Vinaixa’s website is licensed.

In an email from MAPiNET dated Dec 18 and shared with TorrentFreak, the anti-piracy outfit warns Vinaixa that he needs to “change his conduct” or face the consequences. (broken English email quoted verbatim)

“On the past 30 of July we have celebrated a MoU with the Portuguese association of ISPs APRITEL, Portuguese Cultural inspection entity IGAC, and others,” the email states.

“On this MoU websites that have more than 500 copyright protected works or if 2/3 of his content is copyrighted material presented there with no authorization from the legal rights owner are eligible to be blocked by DNS in Portugal.

“If this website do not change its conduct within the next 24 hours we will make all the diligences to proceed with the DNS blocking request.”

Less than an hour later a bemused Vinaixa responded, asking MAPiNET what could possibly be wrong with writing about artists and embedding their official videos in his news articles.

“I really want to fix this because I don’t want any problem. I’m just promoting the new music releases,” he explained.

After receiving no response, Vinaixa’s site was blocked by ISPs in Portugal on Christmas Day. The message now seen by visitors is shown below, as first reported by Revolução dos Bytes.

(Translated: The site you want to access is blocked in the wake of compliance of a Entitdade Regulatory notification)

“You blocked my site in Portugal and you didn’t answer my message. I want to fix this and make my site available in Portugal again. Can you please tell me what I have to do?” he begged.

On January 5, 2016, Vinaixa received a reply but it was not what he’d been hoping for.

“According to the information we have gathered from the Portuguese Music Licensing Company (PassMusica) and all music related Collective Management Entities, you have not submitted any licensing request for your site to operate in the Portuguese Territory,” MAPiNET explained.

“Having said that, we recommend you, as a first step, to obtain the correct licensing for your site to work properly and according to the Portuguese Legislation, and therefore we urge you to address the above mentioned entities.”

“My website is a music site about new releases and future artists from all parts of the world. All the music / videos are from official channels like Youtube, Spotify, Soundcloud or Vevo,” Vinaixa told the licensing outfit.

“I do not understand what I could do wrong, for you to block my access throughout your country. I simply want to return to be operational in Portugal and fix something if there is something to fix. Thank you so much.”

Again, the response was disappointing.

“Further to your email, we can confirm that we have not received any licensing request from you in order to operate in Portugal. Furthermore, we also have information that you have not requested authorization [from] the Record Company to make the music videos and tracks available through your website, as all the platforms you’ve mentioned have requested,” PassMusica told Vinaixa.

“We appreciate that the music and all the videos are from official channels, but those channels have negotiated directly with the record companies in order to be able to make such usage of music, as we are sure you have not. Also, those channels, in their disclaimers do not authorize such utilization.”

But according to Vinaixa, that is nonsense. 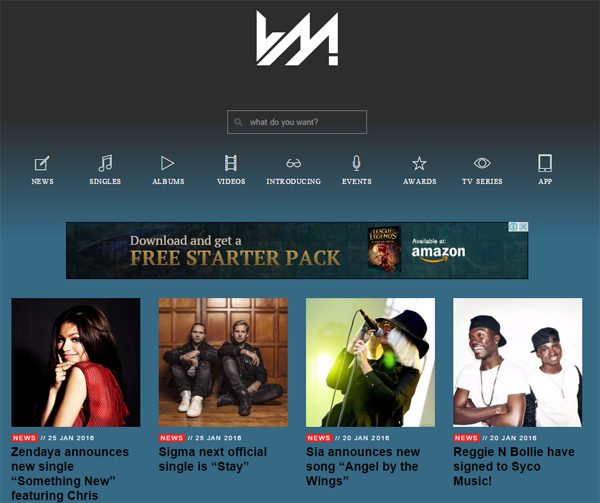 “Excuse me but that’s not true,” he told PassMusica earlier this month.

“All the labels from UK, Australia, USA and Spain send me the information about the releases from their artists and they want me to put all of the videos and audios (official link) on the site.”

Vinaixa told the licensing outfit he’s been working with the labels for three years and no one has ever complained. In fact, all he gets is thanks for his cooperation in promoting the labels’ artists.

“I don’t understand why Portugal blocked me when all the other countries are working with me, the labels and the artists’ advertising agencies. I just want to work properly as I have been doing around the world for 3 years. So you do not tell me I have no license, because I work closely with almost all the record labels.”

So for now Vinaixa and his site is in limbo while being treated like the dozens of hardcore pirate sites on MAPiNET’s register. They are no longer responding to his questions and Portuguese users are still unable to view his site.

According to a 2014 decision by the EU’s Court of Justice, if content is already freely available after being legally published and isn’t already subject to restrictions such as a subscription or pay wall, embedding is not a breach of EU law.

TorrentFreak contacted MAPiNET on two occasions to hear its reasons for blocking Ultimate Music but the anti-piracy group did respond to requests for comment.