Apple’s iOS devices are part of a closed ecosystem that doesn’t allow much tinkering and keeps unvetted apps out.

This works well for the vast majority of people but for those who demand more, jailbreaking is always an option.

While Apple doesn’t like the fact that outsiders are circumventing their restrictions to open up access, it generally turns a blind eye to jailbreaks. The company patches leaks but since the DMCA offers a jailbreak exemption, taking legal action is not the obvious response.

In this light, it’s interesting to see that several copies of the Chimera13 jailbreak were taken down by GitHub this week, through a DMCA notice. This request didn’t come from Apple, however, but from the Unc0ver team, which is behind another iOS jailbreak.

The Unc0ver team accuses third-party developers of pirating their jailbreak code. The DMCA notice points a finger at a specific target, developer Coolstar, who allegedly “stole” Unc0ver’s code to use it as part of the Swift-based Chimera13 jailbreak.

“He was able to obtain a leaked copy of our private unc0ver repository that was previously available at [private] for selected team members of the Unc0ver Team,” the DMCA notice explains.

“We have investigated this user and found that their first appearance on the r/Jailbreak Discord Server, where they later announced that they had obtained the source code, was approximately a day after the infringer had publicly indicated that he was able to obtain information about our work on Twitter,” the Unc0ver team adds.

The DMCA notice asks GitHub to remove the Chimera13 repository as well as dozens of forks. And indeed, the official repository and the forks are all unavailable now. 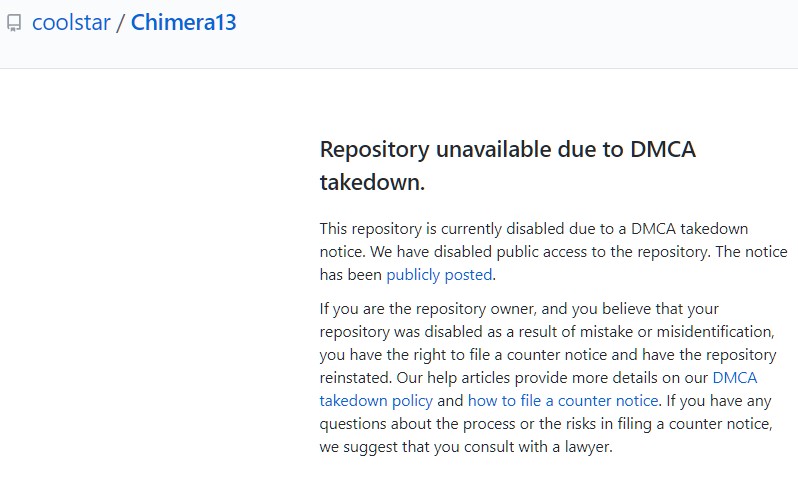 The takedown request is interesting for several reasons. First of all, a team behind an application that is exempted from copyright infringement claims under the DMCA is using the same law to go after another jailbreak app. In addition, the claim itself isn’t without controversy either.

Chimera13 developer Coolstar, who’s a former computer science student at UC Santa Barbara, argues that the takedown notice is unwarranted. He sent a counter-notice to GitHub, asking the company to reinstate his repository.

“The code for Chimera13 is original code that I have written in Swift that relies primarily on the public techniques,” Coolstar writes, pointing out the various pieces of open source and publicly available code that’s included.

“The only 3rd-party code in this repository is Jake James’ time_waste exploit. However, this is under an open source license (GPL),” he adds, highlighting the license in question.

According to Coolstar, the original notice was sent in bad faith. He further accuses the sender of committing perjury and abusing the DMCA process, a claim he repeats on Twitter.

Without making any judgments on the claims from both sides, it is clear that this is more than just a regular DMCA request. It appears to be part of an ongoing feud between two camps, which both develop jailbreak solutions.

In any case, it will be interesting to see how GitHub responds to the counter-notice. According to the regular DMCA process, the Chimera13 repository will be reinstated within two weeks, unless the Unc0ver team takes the matter to court.