In a retaliatory move Google sued the Attorney General, hoping to find out more about the secret plan. The company also demanded internal communication from the MPAA and its lawfirm Jenner & Block.

After the Hollywood group and its lawyers refused to provide all information Google asked for, a separate legal battle began with both sides using rather strong language to state their case.

The MPAA accused Google of facilitating piracy and objected to a request to transfer the case to Mississippi, where the underlying case was started. According to the movie industry group and its lawyers they are merely bystanders who want to resolve the matter in a Washington court.

This week Google responded to the MPAA opposition with a scathing reply, which outs the cozy relationship between the MPAA and the Attorney General’s office.

“Their rhetoric does not match reality,” Google responds (pdf) to the request not to transfer the case. “The MPAA and Jenner are no strangers to Mississippi.”

“The Subpoenaed Parties sought out Mississippi when they co-opted the state’s Attorney General for their anti-Google campaign. Documents withheld by the MPAA until last week reveal a stunning level of involvement in Mississippi’s affairs.”

According to Google it’s clear that the MPAA and its law firm were in “intimate contact” with the Attorney General, offered monetary donations, hosted fundraisers and also helped him to draft legal paperwork.

“Even when they weren’t physically at AG Hood’s office, they may as well have been, getting together with him in Denver and Santa Monica and holding a fundraising dinner for him in New Orleans.”

And there is more. The emails the MPAA recently produced also reveal “remarkably cozy and constant communications” between the MPAA and the Attorney General’s office.

In one email the MPAA’s Brian Cohen greeted one of Hood’s staffers with “Hello my favorite” offering to share pictures of his vacation in New Zealand via Dropbox. In another email discussing a meeting with the AG’s staff, MPAA’s Cohen writes “OMG we spent 3 hours.” 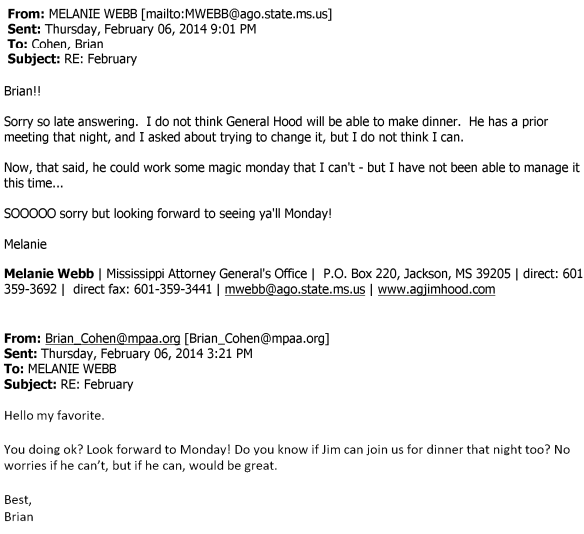 According to Google the examples above clearly show that there’s a rather close relationship between the MPAA’s lobbyists and the Attorney General.

“This pattern of sustained, intimate contact is hardly the mark of a party that merely ‘communicated with Attorney General Hood’ ‘previously,’ as the MPAA characterizes itself.”

Throwing in a movie reference, Google further notes that transferring the case would be in line with Rule 45, which ties the subpoena to the Mississippi case.

“But it is not merely the Subpoenaed Parties’ starring role in the underlying events that warrants transfer of Google’s Motions to Compel to Judge Wingate in Mississippi; all of the Rule 45 factors support it as well,” Google notes.

The reply continues adding more support and arguments to transfer the case, using more strong language, and the sarcastic-aggressive tone continues throughout.

If we hadn’t seen enough evidence already, the filing makes it clear that the MPAA and Google are not on speaking terms, to say the least. And with the Attorney General case just getting started, things may get even worse.