Grooveshark Bites Back at the RIAA: We’re Completely Legal 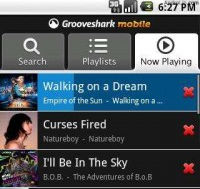 In early April, Google removed Grooveshark’s music app from the Android Marketplace. While not initially confirmed, fingers were immediately pointed at the major record labels as the only groups with the power to influence such a decision.

Google were tight-lipped, saying only that the company removes products that violate their terms and conditions. Last year, however, Grooveshark’s app was removed from Apple’s store on the same grounds. It was later confirmed that Apple had received a complaint from Universal Music.

Perhaps inevitably, some observers have added these two events together and come to the conclusion that if Apple and mighty Google both have issues with Grooveshark there must be a pressing legal issue with the service.

Not according to Senior VP of Information Products at Grooveshark, Paul Geller. In a statement responding to the “misleading press” created by the company’s “detractors and competitors”, he insists that his company’s product and operations are entirely legal.

“Google hasn’t specified what it was in their ‘Terms of Service’ that we allegedly violated, but there does appear to be some confusion about whether Grooveshark is a legal service,” Geller first told Digital Music News.

“So let’s set the record straight: there is nothing illegal about what Grooveshark offers to consumers.”

Geller goes on to clarify the difference between a ‘legal’ service and one that is ‘licensed’.

“Laws come from Congress. Licenses come from businesses,” he explains. “Grooveshark is completely legal because we comply with the laws passed by Congress, but we are not licensed by every label (yet).”

According to Geller, Grooveshark is a technology company, and one which operates firmly within the boundaries of the DMCA.

“Some would have you believe that those of us who use the DMCA to innovate are inherently infringers and that claiming Safe Harbor under the DMCA is as good as admitting guilt. Not so,” he insists.

Geller suggests that the DMCA’s Safe Harbor provision was put in place to allow companies like YouTube (and indeed Grooveshark) to innovate and create ways around the problems being suffered by the content industries.

“If it weren’t for this notion, many of the products and services that are now taking a bite out of piracy would never have been born,” he notes.

On licensing, Geller says that Grooveshark has agreements with thousands of labels all over the world and also pays the three largest US performing rights organizations.

“We pay for our streams, and we actively negotiate with virtually every single content owner,” says Geller.

“We’ve taken down over 1.76 million files and suspended upload privileges to 22,274 users. These are not the characteristics of a company ‘dedicated to copyright infringement’. As we work with artists and labels to make more content available to our users, Grooveshark becomes more competitive as an alternative to piracy.”

Grooveshark is hardly a small affair. Geller says they serve twenty-five million unique monthly users spanning more than 150 countries and will fight for their business.

“In light of the recent misleading press concerning Grooveshark’s application, it is important to make clear that we will defend our service, and the letter and the spirit of the law, in court and in Congress.”

“We will defend our name and our ideals for the sake of our users who expect modern delivery systems and comprehensive access across devices, for the sake of artists and content owners who fear another decade of decline, and for other innovators who continue to bring new ideas to market through the expression of creativity in the form of technology,” he concludes.

In departing, Geller asks Google and Apple to reinstate the Grooveshark apps to their stores. Considering the pressure both companies are under and the negative noises coming from the RIAA, he could be waiting for a long time.