Created by Romanian software engineer Vali (also known as 0x4139), iFlix is a torrent client designed to stream any magnet link in an instant.

Unlike other clients there are no complex settings to manage and the app only springs into life once a magnet link has been clicked. It is incredibly simple to use.

As can be seen from the image below, clicking a magnet link calls up the iFlix interface containing a list of files inside the torrent being accessed. Users simply pick a file and choose their preferred (and already installed) video player and in a matter of seconds the torrent begins to play. 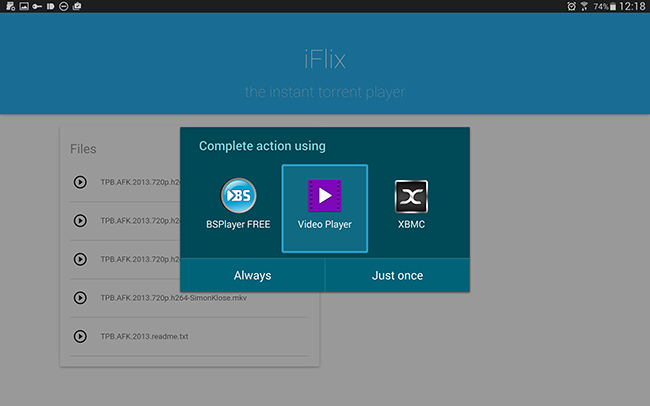 iFlix not only works well, it also has interesting roots.

“We have this startup, which is an application for kindergartens (gradiapp.ro), and one of the features is that we connect mobile/web and all sort of apps to the cameras inside the kindergarten so that parents can watch their kids while there,” Vali tells TorrentFreak.

“We were having problems streaming the data to mobile devices (bandwidth issues) until I decided to make some kind of tracker that keeps the data in chunks of five seconds. That tracker is a peer as well, and after we saw that it worked, we wanted to use it with generic trackers as well.

“With a little tweaking it worked well, after that we spent like two months talking about legal concerns with all kind of lawyers, and we saw the potential that this can grow into a distributed computing grid based on its own keychain,” the dev explains.

In common with all tools that attempt torrent streaming, iFlix performs better with well-seeded torrents. That being said, skipping around files with plenty of peers works surprisingly well and only once or twice did we experience any significant delay. The software also allows users to listen to music torrents and as expected these cue up even more quickly than video.

As for the future, iFlix is likely to receive updates but is actually a stepping stone within another of Vali’s projects.

“iFlix is a product that’s based on a platform that I am trying to create. This platform is intended to be a P2P compute grid based on the Bitcoin protocol where instead of computing hashes to mine coins you compute different tasks, e.g ‘fetch the first two chunks from the magnet:x” which iFlix does at this moment,” Vali explains.

“At this moment the engine behind the platform is based on the Google SPDY protocol and the purpose of iFlix is to measure the scalability of the engine.

“In the near future you can expect to see more products based on the same P2P platform. For example, imagine that you are skiing and directly streaming 2k video from your GoPro via P2P,” Vali concludes.

iFlix for Android can be downloaded here.