Each year, The Internet Foundation In Sweden (IIS) produces a report titled ‘Swedes and the Internet.’ As its name suggests, the report aims to shine light on how people behave online.

Covering issues from social media to smartphones, gambling, and of course, content consumption and file-sharing, the survey of 3,000 citizens aged 11-years-old and up has provided interesting insights in previous years. 2016 is no different.

“Youtube is the most popular site for all ages. It begins in the pre-school years and almost all four-year-olds are using Youtube, but also the oldest are frequent users.

“With the arrival of streaming services more have begun to pay for music and film, but nevertheless file-sharing remains around 20 percent of the population, which it has done for almost ten years.” 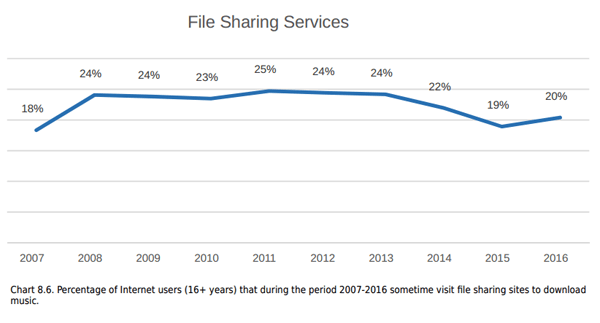 But while the survey indicates that peer-to-peer file-sharing has remained static, other areas of unauthorized content consumption have been on the increase. Notably, web-based streaming services are gaining traction, particularly among lower age groups. 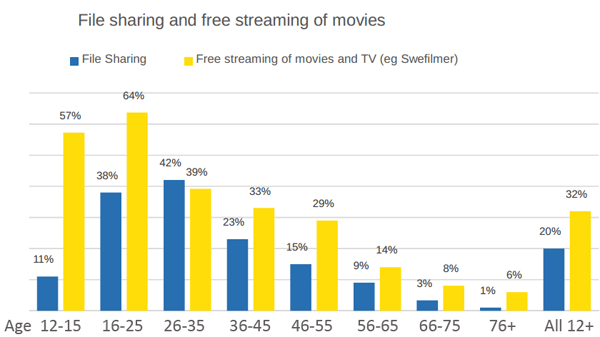 But of course, people obtaining content for free is only part of the puzzle. People paying for official online services has been on the increase since their inception. In 2011, for example, 15% of the population streamed music. That had increased to 38%, 42% and 44% in 2014, 2015 and 2016 respectively.

In 2015, after a late start for video, 28% were subscribing to a Netflix-like service and this year that figure reached 38%. Roughly speaking, four-out-of-ten now pay for a music or video streaming service but it is the young (and traditionally the most likely to pirate) who are the most enthusiastic customers.

In fact, IIS says that those who engage in illegal file-sharing and unauthorized streaming are also more likely to pay.

“60 percent of file-sharers pay for music streaming services, compared with 39 percent of those who do not share files and 44 percent of the population.

The figures are an improvement on those reported in last year’s survey.

In 2015, 58% of music pirates put their hands in their pockets to pay versus just 39% of non-filesharers. The figures for the movie sector were 46% and 24% respectively.

The full report can be downloaded here (pdf, Swedish)

The Pirate Bay’s Swedish Domain is Listed For Sale